Well, it was inevitable really. Valve are now boasting a whopping $15 million dollar prize pool for the biggest eSports event in history: the Dota 2 International 2015. With the final stretch goal unlocked, providing all International Compendium owners a shiny new Axe immortal item plus a comic, there’s two questions that remain.

Will Valve add more stretch goals? And if they do, could this not even be close to the final prize pool?

While this feat of crowdfunding is impressive on its own, one merely needs to look back to last year to see how radically the Dota 2 scene has grown: 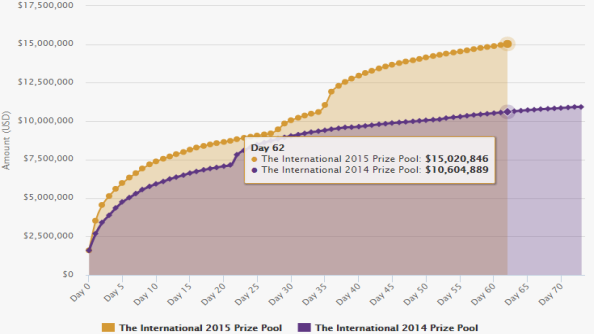 Using Cyborgmatt’s handy Dota 2 Prize Pool Tracker, we can compare this year’s prize pool to that of last years. At day 62, we’ve already upped last year’s pool by nearly $5 million dollars, which is close to 50% of the total. One can surmise that either the Dota 2 population has exploded since last year, or a lot of people’s wallets have somehow gotten deeper.

But it is slowing down. Even though we’ve got a little under a month to go before the big event, the money pipe is starting to drip. Valve are smart however – all it would take is the release of another item collection to give it another one of those surges you can see towards the middle of the graph. Some folk are also waiting patiently for the third batch of immortal rewards to be released, to see if it’s worth them spending more money on leveling their compendium up.

If Valve use the same distribution system as last year’s tournament, the grand winners will walk away with a clean $7 million dollars. What would you do with that sort of money?