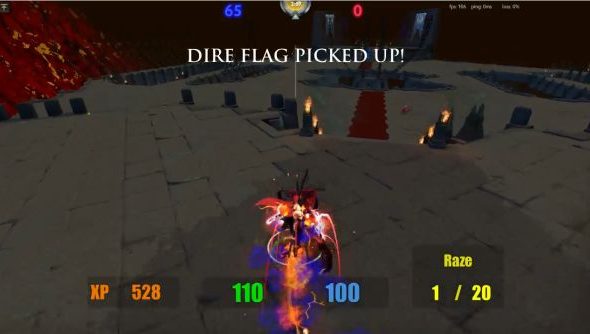 Well, I guess now we know how powerful that map editor is. This Dota 2 mod, Slayers of the Ancients (SOTA, Sota or Premiership of Heroes if you’re feeling spin-offy), takes the engine, assets and some vague hero abilities and builds a third-person CTF-based shooter out of the wreckage. It looks like a lot of fun, and so far removed from the base game as to be almost unrecognisable.

We’ve collected a list of all the best Dota 2 custom maps.

It’s quite the massive hack, as the creator BMD has been pointing outon Reddit today. Here’s the sort of thing they’ve had to deal with while trying to get it to work:

“Source 2 has a physics system which makes mine look like I wrote it in crayon while vomiting on myself, but we have no access to that part of the engine (technically there are teensy tiny things that do touch it, but nothing useful). The same thing goes for object/mesh collision. The Source 2 engine has something which is sure to be extremely fast and highly functional, but we have no (real) access to any of that.”

So, y’know, don’t go too hard on them if you download it from the Steam workshop and give it a shot. I think my favourite part is the endlessly bleeding nightmare walls trapping these three heroes – Shadow Fiend, Sniper and Juggernaut – in an eternal battle for flags. There’s a metaphor for the modern world if ever I saw one.

It’s a work in progress that BMD says they’re back to developing now. Latency is the only real issue that they won’t be able to fix over time, as character movement is controlled at the server end – BMD says you should be alright up to around 100ms and then it gets a lot less fun. It’s likely got quite a few players having been ‘discovered’ today, so hop in game and try it out.