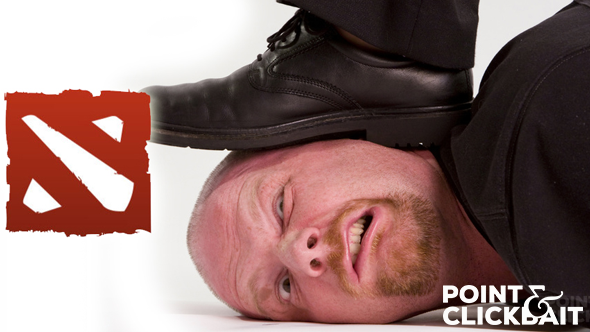 Dota 2 is generally considered quite hostile for new players, but that may be about to change with a new patch from Valve which removes the traditional, unskippable part of the game that sees a Valve employee comes to your house and kicks you repeatedly in the face.

“We know that Dota 2 players have always enjoyed the face-kicking period,” explain Valve in a blog post.

“Every high-ranking player remembers the first time that they fired up the game, only to find a Valve employee already mysteriously in the room, brutally laying into them with steel-capped boots over and over, until their teeth are in ruins and the floor is slick with their blood.”

“But the numbers don’t lie. Our analytics show that a lot of people stop playing at that point for some reason, and we think we can improve the flow-through rate by tweaking the experience slightly there.”

The decision has already proven controversial, with many high-ranking players and even some esports teams expressing their surprise and outrage.

“It’s not just about the face-kicking itself, it’s what the face-kicking represents,” explains team captain Jamie Reeves. “Some say it’s harsh and over-the-top, but being able to play at the top of your game while wanting nothing more than to curl up on the floor and call for help is such an important skill to learn early on.”

“Plus, only that kind of irreversible brain damage can prepare you for dealing with the community of Dota 2, or any MOBA really. That’s why it’s so important.”