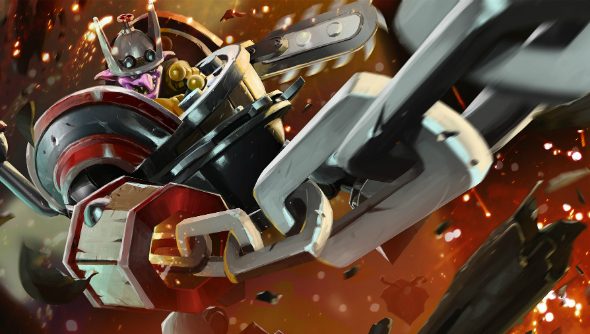 For the past couple of weeks, Dota 2 players have been furiously attempting to cut down as many trees as possible in a bid to earn a couple of extra pachinko balls.

Want to play Dota but not keen on cutting trees? Here are the best Dota heroes to start with.

The community challenges are a new aspect of the Dota 2 Compendium, the digital book of quests and psuedo-gambling that accompanies every Valve Major tournament.

First of the five planned challenges was to cut down 20 billion trees as a community, across however many games it took. As a result, Timbersaw’s pick rate sky-rocketed from 5.99% – well below the all-hero average of 9% – to 11.59% in the span of a week. His win rate also tanked as cutting down trees actually makes him less effective.

However even using as many methods of logging possible in every single match, the hour-long slogs Dota often devolves into meant trees weren’t going down at a rate even close to achievable.

In a patch shortly after the compendium was introduced, Valve added a mini-game to the home screen to play while waiting in a queue. The mini-game simply removed trees from a small orchard every time you clicked on them, with special trees being worth 10 to the final count.

Players were so devoted to achieving the 20 billion figure they began creating scripts to automatically chop trees at an absurd rate, however Valve put an end to these script by limiting the number to a humanly-achievable rate.

Yesterday, Valve realised it would still take several weeks or months to cut the remaining number of trees and added an ultra-rare Golden Tree to the mini-game, worth 20,000 points. Within 12 hours, the challenge was over.

And the community’s reward for this utterly banal achievement? Three more goes on the pachinko-inspired gambling mini-game Lina’s Battle Blaze, which awards level-increasing battle points at values depending on whichever hole the fireball falls into.

The next community challenge is to interrupt 70 million teleports. I’m sure the industrious minds of the Dota 2 playerbase are already working on quick scripts to get their next fireball fix.