Valve have announced plans to completely overhaul Dota 2, bringing with it a new client, user interface, custom games support and more, all tied within the Source 2 engine. They’ll also give players many more options from within the client itself, such as watching in-game streams of matches, to a completely revamped tutorial system using a director AI.

Looks like Dota 2 is going back into beta boys!

“Today we are announcing the Dota 2 Reborn beta,” said Valve. “Which brings with it a new interface, new engine, and Custom Games. Everything in the dashboard has been redesigned utilizing a new UI framework and the engine that powers the game has been fully replaced. On this page we will be giving you a preview of the new interface. Early next week we’ll be talking about Custom Games, and later that week we’ll conclude with various details about the new engine and launch the open beta.

“Throughout the beta we’ll be releasing frequent updates in order to fix bugs and make changes based on the feedback you provide. As you browse around in the new client, you’ll notice a few things that aren’t fully functional yet. Additionally, our focus has been on the dashboard so you’ll find the in-game HUD currently looks the same.

“We want you to help us during the beta with your suggestions and bug reports. Our intention is to keep gameplay and heroes looking and feeling the same, so if you find anything unexpected please let us know. We’ll be bringing the update out of beta some time after The International to ensure we have enough time to respond to all of your feedback.” 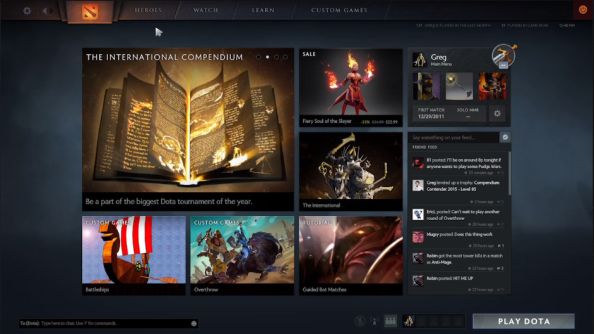 So, where to begin. The entire client UI has been overhauled and redesigned. There’s a lot more contextual menu options, so that you don’t get yanked between screens to accomplish simple tasks. The party and chat system have received quality of life improvements too. Chat allows multiple windows to be up at once, and enables use of commands such as “/r” to respond to the last message. Partial parties can now directly merge with one another, and there’s no party voice chat built right into the lobby that’s persistent when entering a match.

In-game profiles are now a lot more in-depth. Players can now see their friends particular skill with any hero with Hero MMR, as well as a graph detailing their favoured playstyle e.g. pushing, supporting, farming. Any of their achievements will now pop up on a friend activity feed, in which you can comment on.

The hero browser has been cleaned up with a much more approachable way to sort through the hundred plus heroes that accommodate Dota 2. You can sort with a multitude of filters, as well as personalise a hero on the spot. Very similar to Heroes of the Storm, players can now also try out cosmetic outfit in a sample game. Here, not only can they sample an outfit before purchasing it, but they can use this demo to practice the hero, altering their level, items, and bot enemies/minions on the fly. 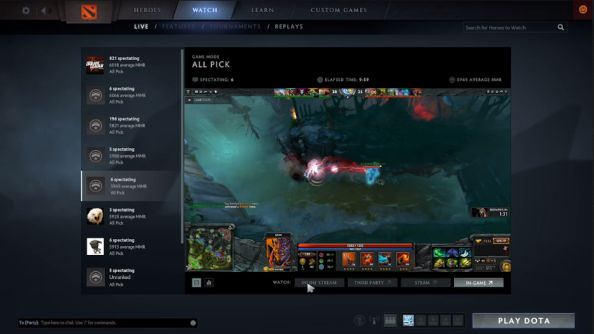 Dota TV has expanded. Instead of only being able to watch Dota 2 games through the client, players can now select games to watch via a 1080p 60 FPS in-line stream, without leaving the dashboard. This will be accompanied with an embedded data stream of stats and graphs. Both of these will be available over the web too. Third-party streams will also be featured within the client. Hitting “Watch Later” will bookmark any given match, saving the reply immediately to view at your convenience. Tournaments are also getting better support, with better brackets and timetable display.

Finally, the Dota 2 tutorial has received a very welcome upgrade. In addition to the narrative tutorial, players will be able to play in “Guided Bot Matches”. Essentially, these matches will be no different than the real deal, except new players will have the help of an AI director, who will give advice that dynamically changes based on any given situation. If you’re taking tower damage, it will tell you to run away. Too low on health, it will tell you how to buy a healing item.

Don’t just take my word on all this – head over to the Dota 2 Reborn launch page to see it all in action. Next week, we’ll be getting details on the new custom games support, powered with the Source 2 engine.