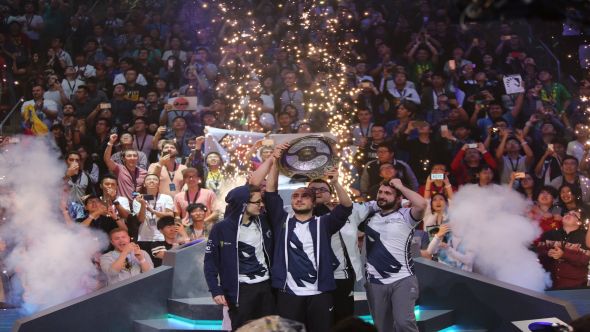 Update, August 14: It’s all over for another year and The International 2017 has finally found its winners. Team Liquid lifted the Aegis of Champions and took home more than $10 million in prize money on Saturday night.

Team Liquid beat Newbee in a clean sweep in Dota 2’s The International Grand Final on Saturday, August 12. The 3-0 victory was Liquid’s first International win, securing them the coveted Aegis of Champions, as well as $10,862,682 for their troubles. Newbee’s second place won them $3,950,066.

Check out our list of the best Dota 2 heroes for beginners.

Liquid’s road to the title was somewhat fraught. Having done well in the group stages, they entered The International’s knockout round in the tournament’s upper bracket. Losing to Invictus in the first round, however, meant that they were immediately relegated to the lower bracket, facing elimination in every one of the five games they had to play to reach the Grand Final. To put that in perspective, Newbee, who remained in the upper bracket throughout the tournament, only had to play three games to reach the same stage.

Newbee seemed to struggle throughout the best-of-five Grand Final. After Liquid rolled over them in game one, they seemed to be turning things around with a dominant early game in their second outing. Delay tactics by Liquid, however, thwarted Newbee, who were unable to cope against their opponents’ late game carries.

Facing defeat, Newbee tried to change things up in game three, opting for a strategy favouring early and mid game dominance. In the end though, this attempt proved fruitless too, and Liquid thwarted Newbee’s hope to lift the Aegis for the second time. It was finally a happy ending for Team Liquid’s captain, Kuro “KuroKy” Salehi Takhasomi, who had appeared at five of the previous six Internationals without success.

Update, August 11:As the International continues, here are all the updates you need from day four of the tournament.

With the finalists already decided for the upper bracket of the International 2017, all that remains at the moment is for those teams in the lower bracket to battle it out for their own slot in the Grand Final.

Yesterday saw Team Liquid in action twice. Comfortably beating Team Empire 2-0 in their third round match, Liquid had only a few hours to rest up and prepare for their next match against Virtus.Pro. In last night’s other third round match, LGD beat OG 2-0 to secure their spot in the fourth round against Invictus Gaming.

Team Liquid vs Virtus.Pro, in contrast to the two clean sweeps that had taken place earlier in the evening, was an utter marathon. Game one lasted for a huge 103 minutes, and the winning factor at the end of the game ended up being respawn timers, which get longer as games progress.

After an hour and a half of play, Virtus.Pro had been pinned inside their base for around 35 minutes, relying on their impressive waveclear to stop Team Liquid from getting close enough to finish the game. At around the 100 minute mark, during a push on the base, two members of Team Liquid died, with respawn counters in excess of two minutes. Virtus used this opportunity to advance straight towards Liquid’s base and actually started attacking Liquid’s Ancient, before a comeback from Liquid saw them kill four Virtus players, winning the game.

Virtus managed to win game two, taking the match to 1-1, but were eventually defeated by Liquid, who won the match 2-1. Liquid now take their place in the lower bracket semi-final, where they’ll play the winner of Invictus Gaming’s match against LGD.

Last night also hosted the TI7 all-star game, in which two teams of fan-chosen players clash for the chance to take home $100,000. This year saw a comfortable victory for Team Radiant, who beat Team Dire for their victory.

Tonight there will be three matches. In the lower bracket, IG will play LGD at 18:00 BST, and the winner of that match will play Team Liquid in the lower bracket semi final at 01:00 BST. The upper bracket final will also take place tonight, at 21:00 BST, between Newbee and LGD Forever Young, with the winner progressing to the grand final.

If you’ve been trying to predict this year’s bracket and haven’t been very successful, don’t worry. Valve announced yesterday that there is only one fan in the world who has a 100% correct bracket prediction at this point. He’ll be getting flown out to TI8 next year, with a VIP pass for his troubles.

History didn’t entirely repeat itself, however, as both games reversed last year’s results, with OG and LGD winning their respective games to face each other in the next round. TNC and Digital Chaos were eliminated from the tournament.

In the upper bracket, Newbee continued their strong run in this year’s tournament, beating Invictus Gaming 2-1, while LGD Forever Young swept over Virtus.Pro, beating them 2-0. The winning teams will face each other in the upper bracket final, while the losers dropped to the lower bracket, where they’ll face the winners of the third round matches, which will take place this evening. The results mean that there’s guaranteed to be a Chinese team in this year’s Grand Final, as either Newbee or LFY will progress to the final game.

Those are in fact tonight’s only matches, with Team Empire taking on Team Liquid at 18:00 BST, and LGD Gaming playing OG at 21:00. The winners will progress to round four, while the losers will leave the competition, taking home $603,525. Not too shabby for 8th place.

Update, August 9:Another day, another International update. Last night’s matches saw two clean sweeps in the upper bracket, while the lower bracket games saw a surprising exit from the tournament.

The International 2017 continues to progress, and last night’s matches confirmed the upper bracket’s semi finalists. LGD Forever Young and Virtus.pro both won their matches 2-0, and progress to face each other in the next round. They defeated TNC Pro Team and LGD gaming respectively, who both descend to the tournament’s lower bracket, where they’ll face OG and Digital Chaos.

If you need a quick refresher on how The International’s double-elimination tournament works, check out the original story, just below this update.

The lower bracket saw more action, as Team Empire defeated EG gaming, who began the knockout stages in the upper bracket but have been eliminated from the tournament without winning a single game. After dominating in the first game, Team Secret were eventually beaten 2-1 by Team Liquid.

This evening’s matches will include both upper bracket semi finals, with Invictus Gaming taking on Newbee at 00:00 BST and Virtus.pro playing LGD Forever Young at 03:00 BST. The winners of these matches will progress to the upper bracket final, while the losers will, as always, descend to the lower bracket.

In the lower bracket, TNC Pro Team play OG at 18:00 BST and LGD gaming face off against Digital Chaos at 21:00 BST. The winners will progress to the next round, while the losers will be eliminated, taking home $359,449 for their efforts.

Update, August 8:The first day of knockout matches for this year’s International took place last night, with wins for Newbee, Team Secret, and Cloud 9, but with one major upset.

The dust has settled on the first day of The International’s knockout stages and not everything has gone according to plan, with the tournament’s first significant upset occurring in yesterday’s match between Team Liquid and Invictus Gaming.

Team Liquid, who finished top in last week’s group stages with a total of 13 wins and three losses, were overall tournament favourites and expected to win comfortably against China’s Invictus Gaming. But it wasn’t to be.

Invictus’ first game draft allowed them excellent vision across the map, and they were able to roll over Team Liquid in just 30 minutes. Liquid came back to win the second game of the series, but in the final game of the match, Invictus’ off-laner Lin “Xxs” Jing scored 13 kills for just two deaths, helping his team to a 2-1 victory and relegating Team Liquid to the tournament’s lower bracket.

In last night’s other quarter final, Newbee comfortably beat Evil Geniuses 2-0, claiming their place against Invictus in the upper bracket’s next round. In the lower bracket’s second round, the first games of which take place this evening, Team Liquid will take on Team Secret, who last night won their match against Execration. Evil Geniuses will battle Cloud 9, who defeated Team Empire.

This evening’s upper bracket games will see LGD.Forever Young against TNC Pro Team at 18:00 BST, and LGD Gaming take on Virtus Pro at 21:00 in best of three matches. Lower bracket games will take place at 00:00 and 03:00 respectively, with the winners progressing to the next round and the losers being eliminated from the tournament.

Original Story, August 7:The International, the biggest prize in Dota 2 and one of the biggest esports events in the world, gets properly underway today after the group stages ended on Saturday.

Today’s matches see the upper bracket quarter finals take place between Team Liquid and Invictus Gaming, as well as Evil Geniuses and Newbee. These matches will be best of three, and kick off at 18:00 and 21:00 BST respectively. The winning teams will advance to the semi-finals, while the losers will drop into the lower bracket’s second round.

In the lower bracket, there are eight teams in action this evening, including Team Secret and Cloud 9. Their matches are single games, and the winners will advance to take on the losing teams from the upper bracket, while the losers will be eliminated. It’s not all bad for the losers though, as even coming dead last will net teams nearly $120,000 in prize money.

If you need a refresher on how The International and its matches are worked out, here you go:

The International starts with a group stage. There are two groups of nine teams, with each team playing every other team in their group in a best of two match. Wins and losses are tallied up, and the top four teams from each group will progress to the upper bracket of the main event, while the next four teams will end up in the lower bracket. The last team in each group will be eliminated.

You can check out the results and replays from all of the group stage matches, as well as taking a look at the brackets for the main event, here. For exact results and start times, Dotabuff has a pretty exhaustive list.