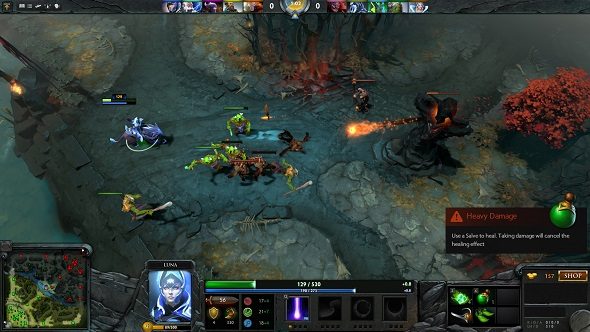 As part of an ongoing lawsuit concerning two developers making unauthorised mobile versions of Dota, the defendants are attempting to argue that Valve doesn’t own the rights to the grandfather of MOBAs. This argument hinges on a forum post from one of the original Dota creators all the way back in 2004, which could prove Dota is actually open source.

Start on the path to Dota mastery with our list of great beginner heroes.

Summarised by federal judge Charles Breyer, this comes as a result of a lawsuit launched by Blizzard and Valve against the companies Lilith Games and uCool. Lilith Games and uCool are the publishers of Dota Legends and Heroes Charge, two immensely popular Chinese mobile games which use characters from Dota. In order to stop the court case, uCool called for a partial summary judgement, by stating that Valve does not actually own the trademark to the original Dota and its subsequent mods, and is therefore unable to make a claim against uCool.

While uCool’s argument that the original Dota is a collective work have been shot down, Breyer comments that the sale of the Dota name to Valve by creators Icefrog and eul could infringe upon the original EULA for Warcraft 3. The EULA forbids the distribution of mods for “commercial purposes” and as far as selling the Dota name to Valve, Breyer states that it “seems as commercial as uses go.”

Moreover, a forum post from all the way back in 2004 shows eul seemingly abandoning his ownership of Dota, by saying that “whoever wishes to release a version of Dota may without my consent.” However, he does “ask for a nod in the credits to your map,” which could be perceived as him holding onto the rights to Dota. Breyer admits that it will be up to the jury to decide whether this rights abandonment applies to everyone (including companies like uCool), or if it was just for “the motley group of modders making up an informal Dota online community.”

After being denied a summary judgement, the court case is set to go before a jury to determine if Dota Legends and Heroes Charges are in violation of a trademark that Valve is the owner of. If the court rules in favour of uCool and Lilith Games, expect to see an avalanche of Dota clones as other companies exploit this loophole. If not, they’ll be paying quite a hefty fine.