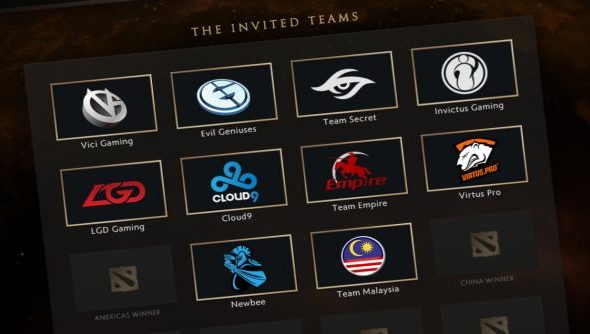 Valve have raised the curtains on the ten lucky Dota 2 teams that have earned a direct invite to this year’s Dota 2 International 2015. Among the lineup is last year’s champions, Newbee – who took home the lion’s share of over $10.9 million dollars; the biggest eSports prize pool in history.

Even more exciting however, is Valve’s debut of the Open Qualifiers: two public tournaments that will feature up to 1024 teams from each of the region groups, hosted by FaceIt (Americas, Europe, Southeast Asia) and Perfect World (China). Any team can sign up, and the winner of each will earn a place in their respective regional qualifier with the rest of the professional teams.

The Dota 2 International 2015 takes place between August 3rd till 8th, at the Seattle KeyArena. Ten teams have already bagged themselves a direct invite to the tournament, and need do nothing more but twiddle their thumbs until the big event. Here’s the full list:

There’s six more invites up for grabs, but teams will have to battle it out over four regional qualifiers to earn them. The winner of each will grab themselves an invite, whereas the four runners-up will face eachother in a Wild Card series in Seattle to determine the last two spots. You can check out which teams have been invited to the qualifiers here.

More interestingly though is Valve’s debut of the Open Qualifiers. They’ve partnered up with tournament organisers FaceIt and Perfect World, to offer the public a chance at fame and glory. Four tournaments featuring up to 1024 teams each will do battle as early as next weekend, and the winner of each regional will be put into their respective regional qualifier. It appears to be on a first come, first served basis, so if you’re at all interested, sign-up sooner rather than later.

Reckon you and four friends have what it takes to lift the Aegis of Champions, and more importantly, a few million dollars?