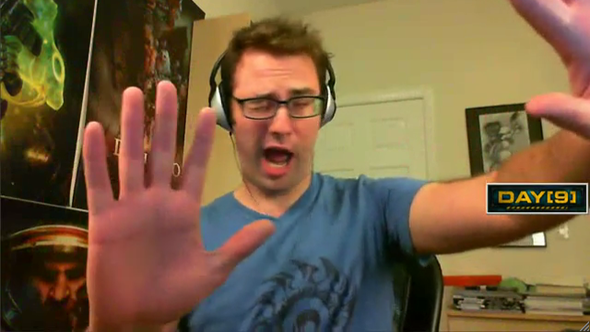 Everyone’s favourite StarCraft veteran and StarCraft 2 commentator Sean Plott aka Day[9] has recently taken to playing another eSport staple in the form of Dota 2. He’s also enlisted the help of fellow commentator, Kevin Godec aka Purge, a Dota 2 caster who many will know from his infamous Dota 2 guide, Welcome to Dota 2, you suck. In the video, Purge goes over a few fundamentals whilst discussing the history of his involvement in the game.

Want to give Dota 2 a try for yourself? Then check out our beginner’s guide.

Having spent much of his time on the pro StarCraft scene, Sean effectively retired from the eSport in 2010 and began commentating at Blizzcon 2011. He has, since 2009, been running Day[9] TV, a webshow consisting mainly of analysis of the StarCraft and StarCraft 2 pro scene. More recently the channel has branched out to include Hearthstone, Portal 2 and a whole host of other PC games.

Purge followed a similar path, beginning his career as a professional player of the original Defense of the Ancients and having an instrumental role in turning Dota 2 into the Worldwide phenomenon that it is today. He has since become a regular face at pro games, often providing key commentary.

You can check out more videos from Sean Plott on his official Youtube channel.