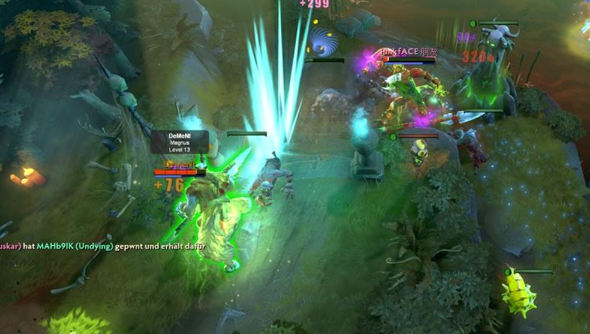 Lock your doors. Do not go outside. Do not search for loved ones. The infection has spread. As of 4am last night the Dota 2 beta reached critical mass and overtook Skyrim as the game with the most concurrent players on Steam, making it the most played game on Steam ever. If you’ve thus far managed to avoid contracting the Dota 2 beta then you are one of the last few. Make peace with your god(s)/relatives/Winnie the Pooh shrine while there is still time.

Previously, Skyrim held the record for the game with the most concurrent players. Set during its release month in November 2011, Skyrim peaked at 287,411 players. Though, this number rapidly slopes off, this month, for instance, only saw 44,037 concurrentadventurers in Tamriel. Dota 2, conversely has ramped up its playerbase steadily, again, since November 2011.

This month it finally overtook Skyrim’s record, setting a new peak at 297,010. You can see the graph better here.

Also, because Dota is still in beta these numbers suggest its playerbase is only going to continue rising. Valve must be pretty excited to see what player numbers they’ll be seeing when they actually get round to opening it up to everyone.

Many thanks to Reddit user Sherzocrk for spotting the crossover and putting together the nifty graph.