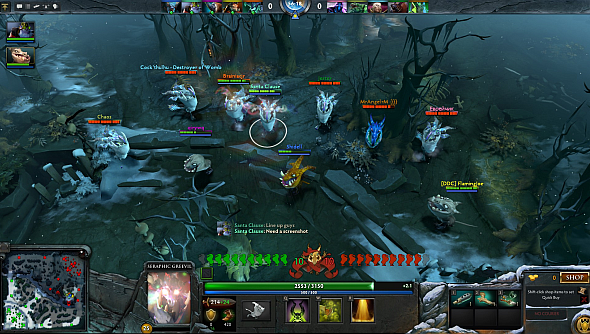 It’s been awhile since we last tasted the chaos that was Diretide, back in the spooky days of Halloween. Now it’s time for some slightly happier festivities in the form of Frostivus. Wait, what? Frostivus was canceled? Well it appears that Diretide has caused an explosive epidemic of mischievous Greevils, who have just gone and snatched all the gifts stowed away for Frostivus.

The chaps over at Valve have our backs though, and have created a game mode especially to go get those gifts back. Grab your well-behaved Greevilings and join me as I teach you the best ways to save Frostivus, while scoring some sweet loot in the process. The Greeviling is heavily based around the addition of Greevils, which have been around ever since Diretide back in Halloween. By getting your hands on a Greevil egg and collecting certain essences you could create your very own Greevil courier, with unique colours and effects. But now It’s much more apparent that they are more than just couriers. You will need a Greevil to make the most of this mode, but don’t worry if you don’t own one as Valve will provide a complimentary Naked Greevil with random abilities.

Ah yes, did I mention that Greevils have special abilities? Well depending on what essences you put into your egg before hatching it, the Greevil will have certain abilities you can use during the match. Also different essences will manipulate some bonus stats that your Greevil can inherit. Don’t worry, because our friendly Cyborgmatt is to the rescue. He has put together this must read guide on how essences affect your Greevil, including all the different combinations. Have a look through it before committing your essences and get a Greevil that suits your play style. Lets get into the game mode itself. To win the game, you must beat the enemy team to slaying eleven Greevil camps. Of course, it’s not that simple. After picking your hero you will start the game with a Frostivus Sock. When you open it you will be given a Greevil Whistle, a random stack of food/drink for replenishing health/mana and a random pair of boots. The Greevil Whistle is the meat of this festive sock, allowing you to transform into your chosen Greevil after a small cast time. The boots can be either Phase Boots, Power Treads, Tranquil Boots, Arcane Boots or some Ice Skates. The latter is a new type of boot specially for this game mode, which gives you 100 movement speed as well as increased control while on ice. More on that later.

One thing to note about your Greevil form is that it is totally separate from your hero. This includes items, health and mana. You can use this to your advantage by switching forms if you’re just about to die, but be careful as you can be interrupted why channeling your whistle.
Your Greevil also comes with some of its own items. As well as the whistle to transform back into your hero, it also gets a random buff item and a Blink Bone which allows your Greevil to blink a very short distance. When the game starts, everyone will accumulate xp at a consistent rate over time. You get no extra xp for killing heroes and gold doesn’t exist. Every two minutes or so, three Greevil camps will spawn randomly on the map. Whoever gets the last hit on the Greevil in each camp earns their team one point. Now this is key because you need to make sure that your team scores the point, as the enemy team can just as easily steal a camp you have been wailing away at with a cheap shot.

After you clear out a camp, the Greevil will drop a gift. This will randomly send an equally random item to one player on each team. Over time your hero will build up quite the repertoire of items which can make them incredibly powerful, but that depends on what you get. Because of this, you want to try and stick to your Greevil form in the beginning of the game. Your hero will be eaten alive at the start until they gain some key items and level up. There is one last hidden gem to this game mode, Thyg the Gift Snatcher. This little devil of a Greevil has even gone as far as to rob the very clothes of our beloved shopkeeper, while he plundered his store for presents. He has a very small chance in every game to spawn during the match, where he will then proceed to skate up, or down the iced over river. Both teams must work together to whack away at his huge health pool before he reaches the other end, and vanishes forever. If you do manage to snatch his life, every player will be awarded with a random gift. It can be anything from a random present to the rare Golden Greevil courier.

Now that you know the basics, lets talk tactics.

Hero picks are just as important as what Greevil you have. Trends are already very apparent on which are the best heroes to foray into battle. I’ll break them down into some specific roles:

Any hero that has great soloing ability is perfect for this mode. Since three camps spawn every round, it usually leads to each team picking one each and then contesting the third. You can exploit this by letting a hero solo a camp, and possibly get your team ahead. Ursa, Lifestealer, Skeleton King, basically any hero that has a good mix of survivability and damage. Just be careful you don’t soften up those Greevils only to be ambushed.

These are your bread and butter. As long as you get the killing blow on the last Greevil alive, your team will win the point. This makes heroes with high mobility and great burst damage excel in stealing camps that the enemy worked so hard to claim for their own. Queen of Pain, Sniper, Necrolyte, Invoker, Ancient Apparition, Clockwerk are just to name a few. They either possess the ability to do massive damage on a global scale or can jump in at the last second with high burst damage.

These can accomplish the same goal as thief heroes but with a bit more risk. They rely on putting down as much AoE damage over time abilities as possible in hopes that they get the last blow. Batrider, Jakiro and Enigma are great at this, especially if they get their hands on a Refresher Orb during the match. Remember though, without sufficient control you could just be softening up a Greevil for the aforementioned heroes to steal.

When a team emerges victorious, they will be rewarded with Nice Frostivus Gifts, whereas the losing side will have to settle with naughty ones. I’ll give you a clue: you want the ones that haven’t been sat on.

I currently like to play Sniper as he can just sit back and assassinate his way to victory. Also he looks like Santa Claus. You have until the 3rd of January next year to play it, so go get Greeviling!