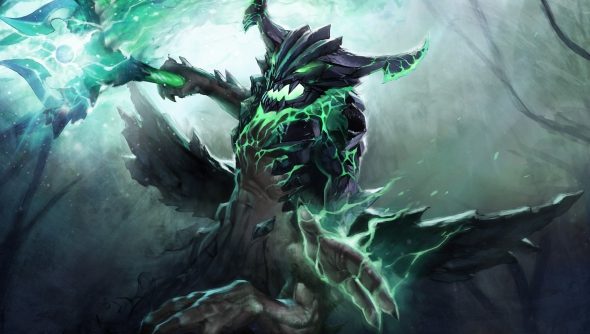 With Team Fortress 2 being a hugely successful payment experiment, Valve are now planning to make Dota 2 their first original free-to-play title. There are no rules when it comes to free-to-play, which means each game has to make them up as they go along. While you can expect to get the game for free, Valve’s Gabe Newell has stated their model will have “have some twists”. I think I know what one of those twists is.

The most direct example comes in an interview with Developwhere he stated: “Some people, when they join a server, a ton of people will run with them. Other people, when they join a server, will cause others to leave. We should have a way of capturing that. We should have a way of rewarding the people who are good for our community.So, in practice a really likable person in our community should get Dota 2 for free, because of past behaviour in Team Fortress 2. Now, a real jerk that annoys everyone, they can still play, but a game is full price and they have to pay an extra hundred dollars if they want voice.”Dota 2 has a way of collecting player-driven data. Click on any player’s name in the menu, be it on your friend’s list or the chat channels in the menu screen and you’ll be given a number of interaction options: because they’re all so derivative, “invite player to group”, “report player”, etc. But the most important addition there is “commend player”.”Commend”? How exactly does that work? What sort of virtual back-slapping can you get into? I clicked on a friend’s name and selected it. Here’s what you get. The options are split into four categories: “Friendly: I think they are amiable”, “Forgiving: I think they are quite forgiving”, “Teaching: They are a good teacher”, “Leadership: They are a good leader”. Notice how they all tie into interaction: it’s more than “This is a nice person” or “they play the game well”, it’s driven by how they treated you.


These votes pop up on their profile as well: the number of commendations is fully visible on their Dota 2 profile page. The negative “Reports” do not, though. But they do have the same granularity of responses. You can report “Text Abuse: They were abusive in text chat”, “Voice Abuse: They were verbally abusive”, “Intentional Ability Abuse: They intentionally used abilities to the detriment of their own team”, and “Intentional Feeding: They intentionally died repeatedly to hurt their own team”. I worry about being terrible and that last one coming back to haunt me.
So are Valve looking to tie in the costs of free-to-play in Dota 2 to how the community reacts to you? Is it feasible? It’s a tricky thing to get to work: it’s player-driven, so it needs input from the community. Even the few seconds it takes to click those screens might be too much for some people to care about. But this is a system that needs emotive decision making: it can’t really be read by the PC watching how you play. That said, it’s a community that’s already huge, regularly in the top-five games on Steam, and it’s not even available generally, so maybe a low yield of clicks is all it needs to benefit? A free game really only need between 3 and 7% of players to pay in order to run at a profit, so perhaps those numbers correlate?It would be a bold move, particularly given that the Action RPG style of game breeds a community that’s notoriously unforgiving, but then if there’s a benefit in being helpful and less abusive than you ordinarily would, it might be Valve solving two problems in one.