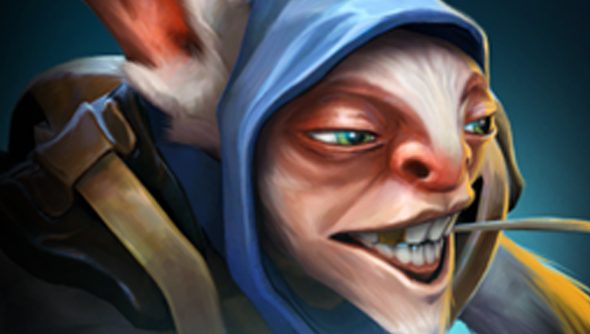 With the International over, Valve are back into the swing of things and adding heroes left and right to Dota 2. Or, adding one hero many times. Meepo is coming to Dota 2, and he’s multiplying. Because that’s what he does.
Update: Valve have changed the way the pause timer works so that it is still 30 seconds before the opposing team can unpause if a player disconnects, which removes most problems with reducing the timer.

Meepo’s thing is his ability to clone himself:the instant he hits level six he starts to duplicate, a new versionof himself via his ultimate. The result: Meepo can have a huge potential to farm and gain experience. But there’s a downside: if one Meepo dies, they all die. Mistakes by a Meepo player will definitely hurt your team.

I’ve just had a muck about with him on the test server and I have come to a few conclusions.

Firstly, I will never play Meepo to a competent level, because he requires you to have a brain that can split itself into five parts and each of them act independently. I’m also convinced you need five separate computers so that you can keep your eye on them all simultaneously. Secondly, the bots have absolutely no idea what Meepo is, and are very confused when they start to die to five of them in a few seconds. The third is that I imagine Lina and Lion are going to start becoming very popular as people are submerged in a tidal wave of wisecracking geomancers.

He’s not the only thing coming with the patch. Pennants are nowavailable for all tournaments, along with animated firstblood, killstreak and multi kill notifications, which show up in a big obvious announcement at the top of your screen. The most controversial change, however, is that the opposing team pause resume time has been reduced from 30 seconds to 5, which seems like an extremely odd decision from Valve. Most of the time when a team needs to pause, it’s because either someone has disconnected, or someone has to emergency AFK for a minute or so.
Needless to say, most opposing teams couldn’t care less that you’re at a temporary disadvantage and will spam the unpause button from the moment you press the pause, and at least with 30 seconds you had a chance to rejoin the game, or sort out whatever was going on off the screen. Now you may as well not have the button. It’ll be interesting to see if that sticks around.

There’s an in depth breakdown of the content added in the patch over at Cyborgmatt’s blog, where he’s unearthed a load of Magnataur’s particle effects that have just been added, making him likely to be the next hero added.

– The buyback button is no longer shown when the hero is reincarnating.- Shift clicking a recipe now puts it in quickbuy.- Fixed misaligned tooltips in the combine tree.- Pennants now work for any game that’s part of a tournament.
– Equipped pennants are now visible in your base when you’re playing.
– New broadcaster select dialog.
– Added animated Firstblood, killstreaks and multikills notifications.- Reduced opposing-team pause resume time down to 5 seconds (from 30 seconds).
– The top bar healthbars now show up any time a player is spectating.
– Fixed issues with the featured hero in the profile not showing the right hero, or not animating after toggling the dashboard.
– Stackable items now have their sellback time expired when they are stacked by a movement inside the inventory.
– The suggested items tab is now reloaded after a player swaps heroes with someone else.

– Added a effect that plays the whole time Keeper’s Mana Leak is active on a target, not just when the target moves.
– Player’s chosen team pennant will display in the fountain area.

– Added Lich bot.
– Added Death Prophet bot.
– Added Viper bot.
– Bots will now select heroes their teammates have suggested in the hero picker.
– Increased the radius and strength of fountain avoidance.
– Tuned the strength of bots desire to place a ward, they should be somewhat more cautious about it now.
– Bots now wait 15 seconds after hero-picking to spring into action. This gives players the opportunity to buy their own couriers, if they want.
– Bots will no longer try to TP out of a fight if they’re currently visible to the enemy team.
– Bots now try to path through FoWed areas when retreating.
– Bots now pay attention to multiple pings, and will use them to strengthen their desire to attack a hero, defend a lane, or push a lane.
– Bots that are disabled due to missing players on the opposing team are now also invulnerable so they cannot be farmed.
– Supports will now defer last-hitting to non-supports in their lane.- Bots on easier difficulty levels will now be worse at retreating out of a gank.
– Fixed bug with the avoidance of Dark Seer’s wall (only half the wall was being avoided).
– Slightly increased sticktoitiveness of bots overall, but moreso for medium and easy bots
– Made Tiny bot less likely to Avalanche when retreating (so it’s harder to harass him into using all his mana).