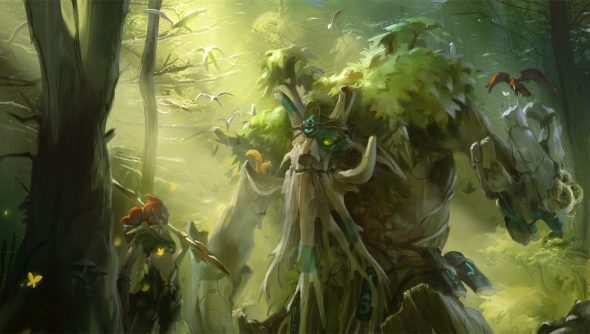 Treant Protector has sprouted clear of Valve’s testing rooms and into the game proper with the latest Dota 2 patch, uprooting one of Dota’s staple heroes and planting them firmly within the updated engine that Vavle’s remake brings. He’s a regular in Dota tournament play, being both a useful ganker in the early game, growing into a solid initiator once you’ve settled into the rhythm of mid game, before ending the game as a powerful tank. Here’s how we think you should play him.

He’s far more esoteric than you might think, though, as he has the capabilities to both be a strong support or a DPS hero, if the need arises. HIs enormous strength gain and high base damage mean that he can stand up to many late game heroes in terms of damage output, and if filling a support role he is a far less brittle holder of items like Pipe, Mechanism or Drums than, for example, Windrunner or Lich.

Many of Rooftrellen’s abilities work very well in supporting his team. He can initiate early ganks either through using Leech Seed, his W, which both slows his target with a series of strong pulses that also heal both himself and nearby allies, or essentially allowing his allies a free invisibility rune every time Nature’s Guise, a camoflauge that both grants movement speed and stealth, so long as you’re close to a treeline that’s embedded on your Q, comes off cooldown. If he doesn’t want to take such an active role early game, preferring to farm, he can also skill Living Armour early, supporting both himself and his team as it’s a passive that grants extra health regen and armour to everyone on the team, so long as the sun is up. It can be the difference between a lane being successfully dominated or a poor start for your team.

Once he hits level six his Overgrowth then becomes the perfect initiating tool for a teamfight. Though not as effective as Tidehunter’s devastating ultimate he does have an advantage in that he can still cast it while invisible, either with Rune or Nature’s Guise, and so will be able to surprise initiate much earlier than most other tanks as he isn’t reliant on a Blink Dagger to sneak up on the enemy team. Built to turn the Treant Protector into a solid early game ganker, there’s still a lot of space for flexibility here if you want to head towards something else. If you want to be more of a support hero go ahead and pump skills into Living Armour, but otherwise stick to getting your ganking skills maxed out as soon as possible, so that you become a stealthy, invisibly ganking dick.

Because of Treant Protector’s versatility, picking any specific set of items for him is tricky, as it’s going to preclude you from another role. It forces you to be heavily situational, and able to switch roles and builds without much notice.

To start, heading straight for a Quelling Blade will make it much easier to last hit, with the extra strenght, and taking a few Tangos and a Healing Salve is always a good idea, along with some Clarity Potions to keep his small mana pool from drying out too quickly. A Stout Shield, too, could be useful in taking out enemy heroes as you’re taking damage from enemy creeps. You just need to read the enemy setup and act accordingly.

Once you get into the early game, you want to set up your core with some Arcane Boots and a Magic Wand, which gives you the mana you need to sustain on your lane. Everything beyond that is situational, with the Drum of Endurance usually a good pick to help with early pushes and movement speed, or heading towards Radiance to get your income set up with free creep kills, but it necessitates early creep kills which stops you from ganking.

This is the point at which things start to diverge, and you need to start thinking about what’s needed, rather than sticking to your guns with any one path. If you’re finding yourself the only hero capable of support on your team, you need to head towards Mekanism and Pipe of Insight, especially if they have a lot of high damage casters, as the Pipe will take the edge off the damage while your Mekanism heals everyone back up. You might even want to go for Vladimir’s Offering, for both the lifesteal and mana regen, but its usefulness is much more situational.

If you’ve got a solid support and are able to go into more of a tanky role, grab a Vanguard for the early game health and armour benefits and then you want to start building a Shiva’s Guard, as its mana regen and armour will keep you alive and kicking, although you may want to consider an Assault Cuirass if you’ve got a lot of AD on your team. Heart of Tarrasque also does a great deal to compliment Treant’s huge strength gain, making him a true powerhouse, although the cost does deter.

Either way, you’re going to want to grab some gank-friendly items that keep you able to initiate and shamble around with greater ease. Refresher Orb keeps your ultimate off cooldown, meaning you can almost constantly throw your Overgrowth into the heart of the enemy team, letting your teammates mop up, and any of Heaven’s Halberd, Sange and Yasha or Battlefury will help you get close and personal, or stop them from getting away from your close and personal.

If you grabbed a Quelling Blade, early last hitting will be a breeze, as his high damage and high strength will let you take the hits while you harass in the middle of the lane. Keep your health topped up with Tangos and Leech Seed, and be on the lookout in the early game for opportunities to gank with the slow on your Q. It’s also worth bearing in mind that Nature’s Guise can be cast on friendlies, letting you give the gankers on your team the advantage of getting right up close before making their move. Once you hit six, make sure your allies are close when you pop your ultimate, because the long cooldown makes a waste costly.

Hit the fifteen minute mark, with all your skills unlocked and a few item builds under your bark, and things start to really swing Treant Protector’s way. Nature’s Guise, if used regularly and well to get your teammates in the right position is going to either force them to buy Gems or Dust, which will eat into their income. Knowing when to use Overgrowth to disable the entire enemy team headed into a teamfight will, nine times out of ten, be the deciding factor. Your speed with Nature’s Guise and Drums, if you picked them up, will give you great mobility to move through the map, picking up minion kills and making sure you’re in the right place to initiate when a team fight occurs.

A tower crumbles, and a few teamfights have scrapped their way to a victory on either side, and by now you’re going to want to have grabbed at least two of your luxury items, finalising your build and your role within the game. Built right, your strength should be scaling drastically, making your farm become truly powerful, and your income start to sky rocket. If you grab items like Assault Cuirass or Heaven’s Halberd, you might even be able to go toe to root with Agility heroes, and with your increasing strength your health will make tanking much more viable, meaning that after initiating with Overgrowth you can stick around and deal some more damage. With Shiva’s and Refresher, you can tangle an entire team for six seconds /and/ slow them, making your DPS heroes and nukes fire off their most powerful attacks, turning any teamfight into a massacre.

This all leaves Treant Protector as an asset to any team, with his versatility meaning that he’s always going to be a good pick, regardless of the rest of the team setup. It requires a great deal of skill and decisiveness to make sure he’s a dominant force on the map in every stage of the map, but when played well he can be truly devastating, leaving the enemy team almost powerless to do anything but become mulch.