2013 was a great year for Twitch. 45 million viewers watched 12 billion minutes of video, that’s more than double the number of users and amount of viewing time than 2012. The biggest winner of last year looks to be Dota 2. It rose to the second most viewed game on the service, with a 508% increase in viewing minutes.

League of Legends still holds the top spot on Twitch but considering Dota 2 only came out of beta last year and already holds the number two spot on the streaming service is mightily impressive. Dota 2’s non-beta status no doubt contributed to its rise in viewership. With more access to the game player interest was free to grow unhindered. 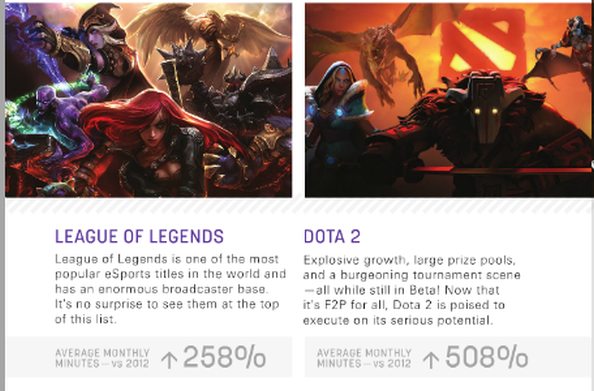 It will be fascinating to see how the two compare at the end of 2014. League of legends has a simply huge audience but Dota 2’s is rapidly growing. It’s become the most popular game on Steam and there’s no sign of the game’s popularity diminishing,

You can read the full Twitch 2013 round up in this fancy web comic.