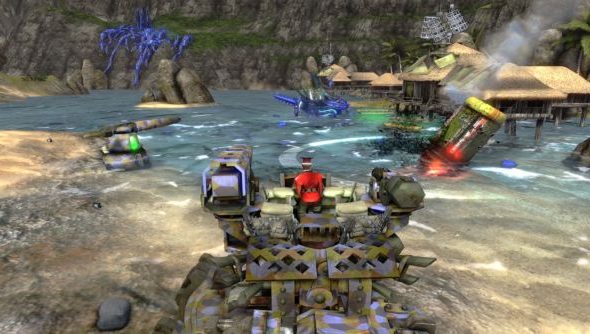 Iron Brigade is dead good! Chances are you didn’t know that: partly because you’re a busy human being with a hierarchy of needs that prioritises food and The Witcher, and partly because Double Fine release more games than is possible to hold in memory at one time.

Sometimes that’s a good thing, and you dodge the bafflingly bitty puzzle design of Hack ‘n’ Slash. But sometimes you miss third-person tower defence in a trench with metal legs.

Why not rectify that now, at a time when Double Fine have regained the Iron Brigade rights and are plotting Steam matchmaking?

Since giving up being a developer of one big game every three years to become a developer who makes three little games every year, Double Fine have begun a concerted effort to grab ownership of their work and never let go.

In an industry where intellectual property is usually the first thing sacrificed at the altar of publishing, they’ve managed to pick up the rights to both Costume Quest and Stacking in the aftermath of THQ’s bankruptcy. And now Iron Brigade, née Trenched, will also be self-published on PC under the Double Fine label.

“The great thing about this change is that now there are no obstacles to us creating the best possible experience for players,” said the perma-grinning Brad Muir, who directed Iron Brigade and now heads up work on Massive Chalice.

“We have fixed all known issues as well as provided a great matchmaking experience for multiplayer. Vlad and his Monovision Menace are on the move again! In the best possible way!”

Iron Brigade will be extricated from the remains of Games for Windows Live, and future matchmaking will be handled by Steam – where the game is currently 80% off.

“There are currently no plans to rename the game, ‘Trenched’,” quipped Double Fine. Those quipsters. Think you’ll relive 2011 for this one?