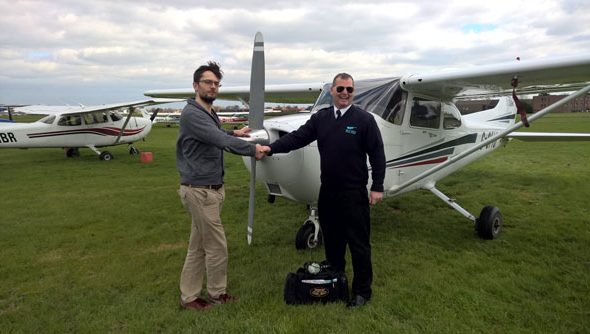 I’m not terribly keen on flying; not in the sense that I freak out, start threatening fellow passengers with a spork and force the pilot to do an emergency landing, more that I quietly reconcile myself with the idea of dying a horrific death each time I take off.

I’m therefore asking myself over and over why I’m off to have a lesson in flying a light aircraft; not just can aircraft, but a light one – the type that you hear about coming down in South American mountain ranges or going out over the sea and never coming back again.

Prefer to take your flying skills beyond the atmosphere? Check out the best space games on PC.

On the bright side, Rochester Airfield doesn’t really strike me as the kind of place where freak storms or dramatic things in general happen. It’s perhaps a bit more understated than the airfields I’ve seen in the movies. Instead of a metallic curved hangar it has a long, brick building that could equally be a battery farm, and when I ask where the runway is I’m informed that I’m looking at it – a long, bumpy strip of grass cut surrounded by slightly longer grass.

I’m here learning to fly a light aircraft so I can compare it to the experience of playing Dovetail Flight School, the flight sim from Dovetail Games that intends to reinvigorate a genre that’s been more or less in the wilderness since Microsoft Flight Simulator X back in 2006. There are plenty of similarities between the real thing and the sim, but here are six (mostly terrifying) things I learned from flying an actual plane that even the upcoming flight sim can’t possibly replicate.

You pay attention to the dials, because your life depends on them 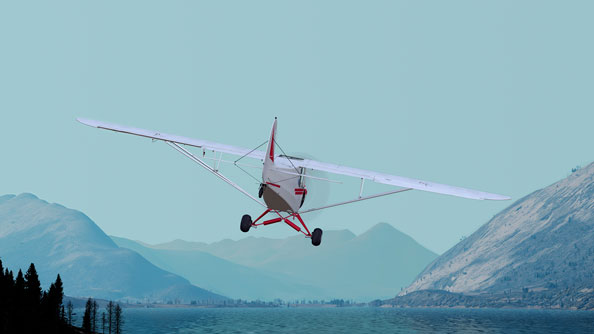 Mike, my instructor and the man to whom I entrust my life, teaches me the basics of flying a light aircraft – how to pitch, trim, steer, and make turns at several thousand feet. He’s calm and unresponsive to my moments of anxiety, such as when I ask about how old the aircraft is based on the fact that the cockpit is filled steam gauges rather than touchscreens (10 years old, making it a relative youngster), or when I point out after he switches the engine on that the fuel gauge appears to be at zero (turned out I was pointing at the wrong gauge).

Mike is a solid presence throughout the flight, clearly confident after 28 years of experience that nothing will go wrong today, and not feeling the need to mollycoddle me and tell me ‘everything will be OK’. With that said, I wasn’t keen on his propensity for the word ‘rip’ – used in such contexts as ‘go above 110mph and the wings will get ripped off the plane’, or ‘if you use your brakes when landing, you’ll rip the wheels up’.

Can’t he have picked a more tame verb, like ‘pop’? 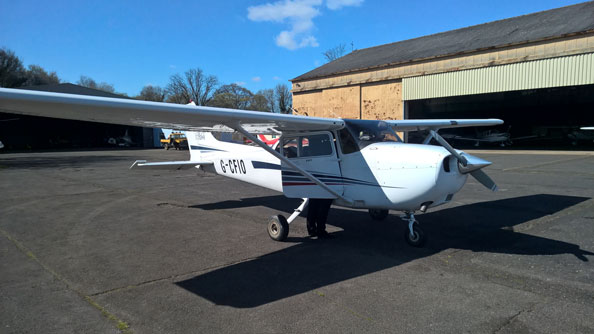 The moment the engine starts running on my Cessna C-172 light aircraft, I become acutely aware of just how light it really is. The engine reverberates through the whole craft as if it’s a caged beast trying to gnaw its way out of the plane’s delicate chassis. Similarly violent thoughts dominate my headspace for the next hour of flight training.

That sense of turbulence and volatility is the first big difference I notice between starting a plane in real life and in Dovetail Flight School. Turn the key in a real plane, and the dials go haywire for a moment, and all human noise gets drowned out in the din. As with most vehicles in most games, the transition from ‘engine off’ to motion is a buttery-smooth one in Dovetail Flight School. Capturing that raw power of a vehicular engine as it starts is something that’s tough to replicate. 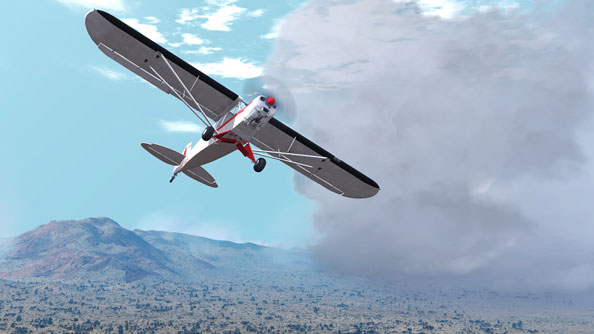 I take a smug satisfaction from the fact that, thanks to my real-life lesson, I immediately understand fancy terms in Flight School like pitching, yawing, and trimming – a kind of autopilot function that essentially locks the aircraft to keep moving at its given angle, so you don’t need to hold onto the controls constantly if you’re flying level or ascending, for example.

But even though I understand the idea of trimming, I still don’t trust it when actually flying. Mike pretty much had to pry my fingers off the wheel even though the plane was trimmed to stay level. It’s a similar instinct that kicks in when I’m a passenger on commercial airliners and look out the window to see what’s going on and give myself the illusion of control (‘Yep, the engine hasn’t caught fire or fallen off the wing. We’re all good.’).

Naturally, when I came round to trimming in Dovetail Flight School, it felt comparatively relaxing, mundane even, but in that enjoyable way that’s made Euro Truck Simulator such a hit. Setting yourself on a flight path, then adjusting the trimming so you can kick back and admire the world below while not plummeting out of the sky is a satisfying feeling, and one that I didn’t realise I’d actually appreciate until I did it. Such is the strange effect of a solid vehicle simulator. 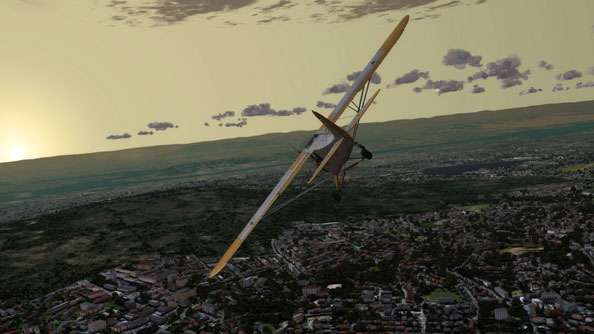 In Flight School, I decide to head out from Shoreham airfield and cruise along the coast past Brighton to my parents’ hometown of Eastbourne. Terrain, roads and cities in Flight School are generated based on a third-party technology that maps road systems and creates buildings based on known populations in given areas. The topography doesn’t really resemble these environs that I’m so familiar with, but I can forgive the lack of detail given that it’s mapped the entire planet.

Cruising along the (slightly flat) English south coast, I feel comfortable doing sharp banking turns and keep my cool each time my plane stalls because I’m ascending too steeply (solution: point the craft’s nose down to gain momentum and get the engine going again). It does get pointed out to me, however, that I’m flying in easy mode, so don’t need to deal with serious things like adjusting the fuel mixture at different altitudes.

It’s perhaps unsurprising that the experience of sharp turns in an airplane is more harrowing in real life. In truth, I don’t even know if what I was doing with Mike really were sharp turns, or just felt like it in relation to the gentle left-and-right adjustments I was doing up to that point, but to me they may as well have been barrel rolls.

To keep the plane level while turning, I need to angle it upwards to make up for the downward momentum of the turn. My sweaty hands grip the wheel tightly, and I feel like I’m on the verge of tipping the plane upside down down (which Mike tells me isn’t the case). I don’t think I do this part with flying colours, but to hell with it. My meagre little turns feel safe, and that’s the most important thing.

G-force feels like it’s going to knock you out 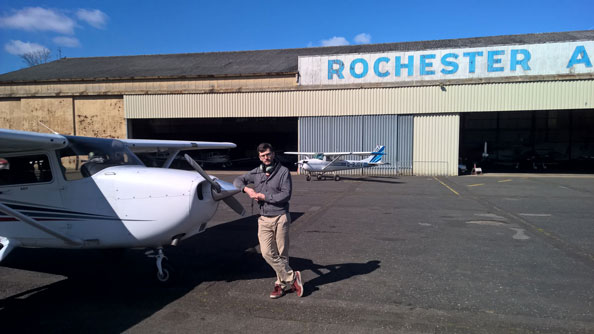 Doing a sharp turn also causes a tightness in my skull from the g-force, which is an experience of additional weight resulting from a combination of the plane’s acceleration and the angle it’s turning at (the sharper the angle, the greater the weight).

It’s not too uncomfortable, and when I later watch videos of the g-force training military pilots go through, I get some perspective on what serious g-force must feel like. It feels a bit like your head would after being upside down for 10 seconds, and (worryingly), it makes me a little drowsy just for a minute. A minute, I think to myself, is a long time to be in the air if Mike and I both were to faint, and I’m overcome by the nightmare vision of the plane corkscrewing into the Dovetail offices. I decide not to share this with Mike, who I’ve hassled enough with my petty neuroses.

You’re concentrating too hard to appreciate the lovely scenery 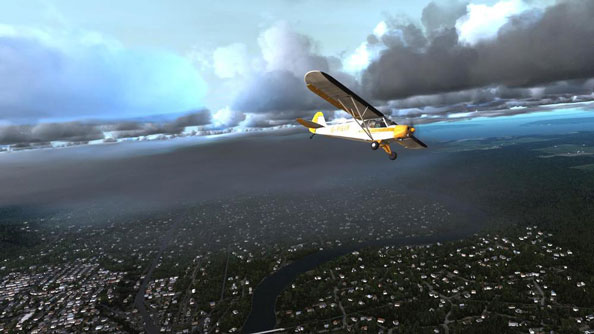 It’s a beautiful day during my trial flight – perfect for appreciating the sights of a sun-soaked Essex that Mike’s pointing out to me. Apparently, France is visible, as is Rochester cathedral and the vast outlet of the Thames estuary, but I can’t confirm or deny any of these things, because I’m too aware of the thermal turbulence, caused by rising currents of hot air, and am staring hard at the dials to make sure the plane’s wings are straight and that we’re descending at the right angle.

Mike even tells me that I shouldn’t be looking at the dials, and using my intuition about the plane’s positioning by looking out the window, but I inform him that I have no such intuitions. I’ve been driving a car for years and I’m still not terribly good at parallel parking, so it stands to reason that in a plane I’m going to rely on any artificial aids I can lay my eyes on.

Sorry Mike, I’m sure Rochester Cathedral looks lovely from the air, and it really is impressive that we can see the French coast today, but I’m busy trying to keep us alive here. 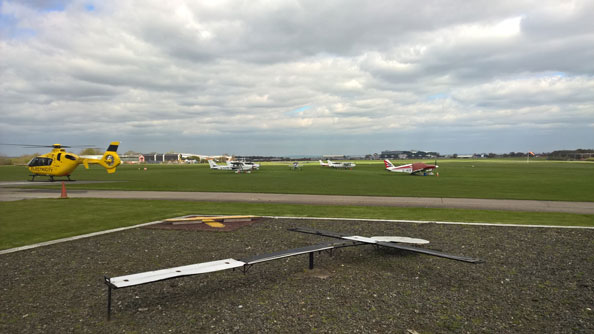 Not much about my trial flight suggested I was prepared for some of the more focused challenges available in Flight School. Ferrying missions, for example, put you in the role of a mercenary pilot (at least, that’s how I like to envision myself), tasked with delivering craft around the world, with the possibility of being diverted to deal with events such as distress signals from ships in the ocean.

Other scenarios force you to deal with engine failures or running out of fuel. I try my hand at one of these, having to guide a plane to a runway before it plummets to the ground. I’m not frugal enough with my throttle, so ‘improvise’ and make an emergency landing (see: crash) in the woods, taking advantage of the no-clip trees to go straight through them and come to rest on the forest floor.

After my hour at the wheel of an airplane, I can say that the ‘thrill’ of feeling g-force in my skull as I make a steep turn, or of thermal turbulence rocking my flimsy-feeling aircraft from side to side isn’t for me. But the fantasy of realistic aerial travel is understandable, and one that’s been neglected by the games industry in recent years. Using a refined version of Microsoft Flight Simulator’s technology, Dovetail wants to bring it back for flight sim pros, while at the same time introducing it to the non-hardcore crowd.