There’s something about the way flight sims conduct themselves that simultaneously alienates and entices the gamer. At once they seem too aloof to be considered entertainment, and yet so impossibly brimming with fastidious detail that – well, how could it not be entertaining? In the end, its the daunting scale of the flight sim’s proposition that whittles down its long-term audience, turning a cold shoulder to those who wanted to get a Cessna in the air without fifteen minutes of prior reading, but revealing a rich hobby that seems to transcend gaming to those prepared to put in the graft.

The world’s a blissful, combat-free place in Dovetail Flight School – for something to air your crosshairs at, try the best WW2 games on PC.

And if playing a flight sim is sufficiently daunting that only a dedicated minority perseveres, what must it be like to develop one? To be tasked not just with understanding the physics model and controls, but implementing them in the first place?

“The last flight sim that I bought myself was [Microsoft Flight Simulator 2004] Century of Flight from Microsoft in 2004,” he tells me, “and I didn’t get a great deal out of that. I had the myriad disks that came with that, [but[ I was left wanting. There didn’t seem in my mind to be a purpose to the experience, other than the one that you would create in your head. You have to create these fantasies, like ‘Oh I’m doing this kind of job, or I’m this kind of airline pilot, or I’m a commercial pilot shuttling this cargo around.'” 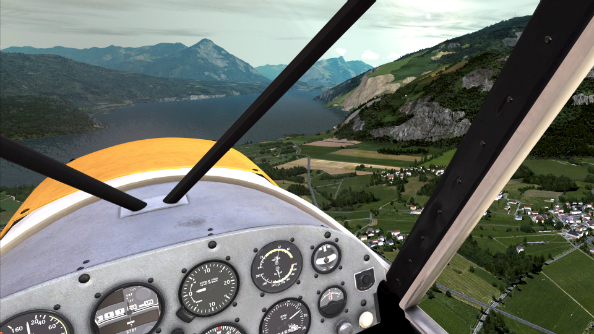 Growing up with flight sims from the Amiga era onwards, Hood found it to be a hit-and-miss genre, but for “a few greats.” However, he’s always wanted to make one himself – to Hood, the whole space seems like a missed opportunity in the last few years for all but “a few large companies who have maybe lost their way, if I may be so bold.”

So, taking the role as creative director on Dovetail Flight School, itself a modern refresh of Microsoft’s Flight Simulator X’s nuts and bolts, Hood went method.

“What I did when I joined a year and a bit ago was to start studying as if I was going to become a qualified private pilot. I bought all the books, started studying for the exams, nearly put myself down for some of them, and I’ve gone and done some of the practical lessons at a local airfield.”

He’s immersed himself in that world, he says. It’s a world that in reality is closed off to the majority behind a towering paywall, and as a result most people who pick up a flight sim don’t know how accurate the simulation model they’re dealing with really is. The same could be said of an F1 car, Hood’s previous preserve, too – but if you’ve ever strapped into a go-kart or attended a track day you can at least join the dots.

That absence of like-for-like experience leads to some pretty banal activities sneaking their way into flight sims, like hoop flying. “I’ve never liked it,” says Hood. “I think one of the things I’ve tried to do is capture what it means to be there – in reality you don’t fly through hoops, you have an instructor who sits beside you, and waypoints on a GPS should you be allowed to use it. 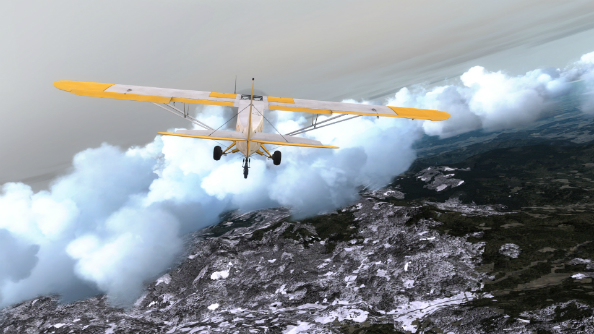 “I want to capture what it’s like to actually be there with an instructor. it’s not massively complex to fly an aircraft, I’ve done it. With hardly any training I’ve messed around on flight sim and I appreciate what it takes to fly an aircraft. The only difficulty I had was overcoming the fear of doing the thing for real and knowing that if I did mess up it would be goodnight for both of us, and that’s the stopper.

“I think that stops a lot of people taking to the skies to do this in reality, that and the financial investment it takes.”

If you have a passion for aeronautics, grounded only by fear and a light wallet, it stands to reason that piloting a pretend craft between endless floating rings isn’t going to satiate you. Dovetail Flight School isn’t intended simply as a flight sim, Hood tells me, but as a recreation of those first few flying lessons, aiming to capture the atmosphere of being with an instructor in the cockpit of a light aircraft.

Beginning with the lessons you need to bag that light aircraft license, you’ll then hop the pond over to the states and earn your private pilot’s license, performing well-practiced manoeuvres in entirely new aircraft. It’s the sort of career fantasty Hood talks about inventing in his Microsoft Flight Sim 2004 days. 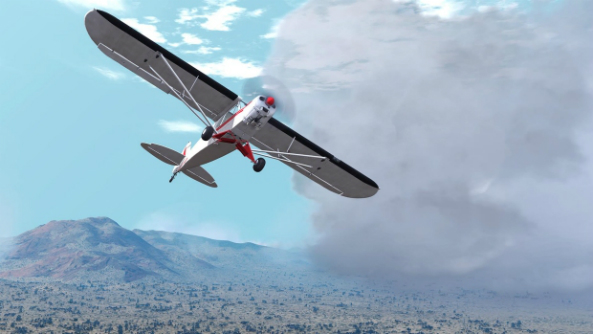 Of course, for all the innovations it intends to bring, Dovetail Flight School won’t be a completely alien experience to most flight sim fans, because it bears so much of Microsoft Flight Simulator X’s DNA. For those who didn’t follow the story, Dovetail bought the rights to the beloved and beleaguered 2006 IP, using it as a starting point for a new generation of sim.

“We are building out from the foundations of FSX’s original flight sim technology,” explains Hood. “We did that because FSX was the last simulator from Microsoft that had many of the components that I believe were fundamental to the principle of flying or being a pilot.

“You’ve got the radio in there for starters, you’ve got AI traffic in there, so the world isn’t empty. You can fly around the entire world and I think that is a huge draw for a flight simulator, literally take off from any airport and fly anywhere in the world. I come from a space [the F1 series] where we’re trying to tightly define as much as possible where the user goes so we can make it as pretty as possible, [whereas a] flight sim says you’ve got the entire planet to fly around, and that’s absolutely crazy.”

Rather than throwing out assets for the sake of it, Hood and his Dovetail team have instead been working on updating visual assets so that world looks prettier as you explore it from thousands of feet above. “Specific areas are handcrafted, so the flight school locations we generated ourselves have been completely redone, new aircraft built from the ground up that we’re building into Flight Sim and the tech that goes with that. It’s not just about creating 3D models, it’s about creating the technology for the renderer to make the world seem more believable and authentic through visuals, it’s incredibly important.”

It puts Dovetail Flight School, as Hood sees it, a leap ahead of other flight sims who have to begin from scratch, rather than using the foundations of one of the best examples the genre has enjoyed in the past decade – albeit right at the beginning of it.