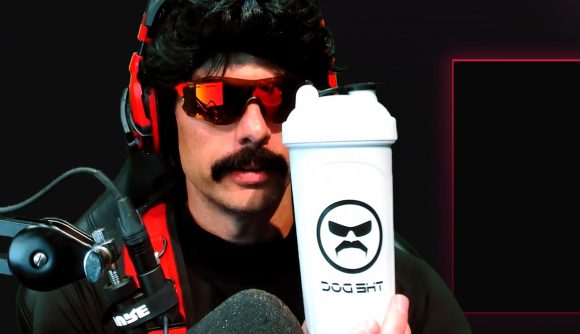 Dr DisRespect has a new bit of merch – a G FUEL shaker with the Doc’s logo and the words ‘dog shit’ written across the bottom. He asserts that it does not, in fact, say ‘dog shit,’ and instead says ‘the Doc.’ But just look at the image above. The evidence is clear, and impossible for anyone to deny.

It very much does say ‘dog shit,’ at least when viewed in reverse – which is how Dr DisRespect debuted the cup in his Twitch stream. If you view it from a standard perspective then yes, I guess it does say ‘the Doc.’ A font design that perfectly reverses between ‘dog shit’ and ‘the Doc’ is one heck of a design feat, though.

You can see Dr. DisRespect’s arguments below.

Thanks to Dexerto for bringing this incredibly important story to our attention. I’d wish the Doc better luck in future merch designs, but honestly I’m not sure there’s any improvement to be had here.