Mark Darrah, executive producer on Dragon Age and man with a surname like a wizard, recently tweeted out a poll asking players if they would play a Dragon Age Tactics game.

Dragon Age Tactics doesn’t exist yet, but the rest of the games in our picks of the best strategy games on PC do.

When asked what specifically he meant by “Tactics”, Darrah replied: “like Fire Emblem or XCOM. Turn based”. This bit of Twitter-based market research seems to be testing the waters to not only see if people are interested, but to find out specifically which platform holders would want to play such a game. At the time of writing, the poll has the following results: 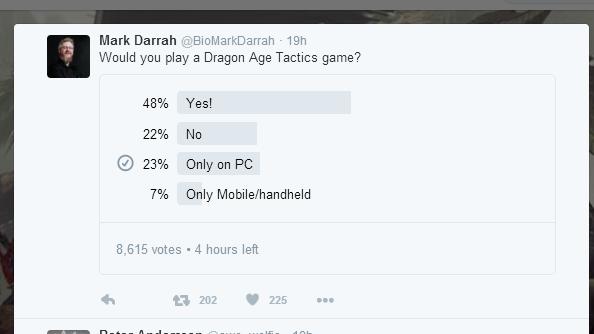 Of course I voted “Only on PC” – this is PCGamesN.com… I’m contractually obliged, alright? Either way, it looks like there’s a real interest so far. Personally, I reckon turn-based action would be a great fit for the series. Not only would BioWare’s signature in-game relationships translate to the genre – imagine how heartbreaking it would be when your significant other falls on the battlefield – but Dragon Age’s classes already make sense in the context of a turn-based strategy game.

If you ever played Dragon Age: Origins with friendly-fire on, you’ll be aware of how well the story marries gameplay with this setting enabled. This is a world where mages are feared because of their terrible power, and in battle they’re just as likely to take your warriors out in a cone of fire or a meteor shower as they are your enemies. You don’t need me to explain how brilliantly this could translate to a game like XCOM, with every spell and ability having to be cautiously placed. And if you’re worried that this would replace the main series, Darrah confirmed on Twitter that it would likely be a spinoff if it did materialise. Basically, just do it BioWare. Cheers.