Let’s get it out of the way: the E3 demo of Dragon Age: Inquisition is absolutely stunning. It is rolling blunderbuss of highlights, a demonstration of the game’s massive open world, a chance to understand how Dragon Age’s pause based combat has been refined and improved, and a first glimpse of the weight of the game’s story choices.

The warm, rapturous applause the demo received was richly deserved.

The game opens in a lush, semi-European fantasy forest. But it is slightly weird: verdant greenery is bursting out of unnaturally cubic rock formations. Castles are built into the cliffs, and a breach, the demon spawning portal that frames the game’s story, is a vast green cloud high above. Your goal: to close the breach. Your goal for now: to end infighting between the Mages and Templar.

Dragon Age: Inquisition is an open world RPG. It is vast; way bigger than both Dragon Age 1 and 2, and rendered in Battlefield’s Frostbite engine. It is immediately beautiful, and immediately big. Aside from moments of fast travel, we see no loading screens, even as we transition between the countryside and the Mage’s castle. 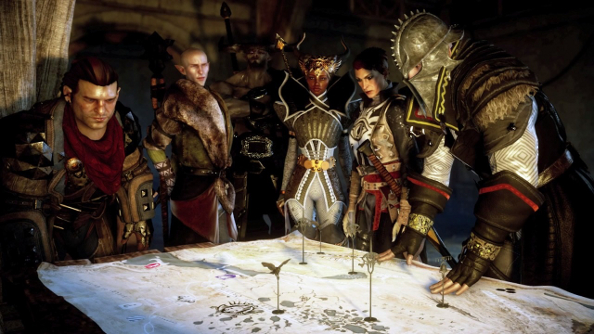 You are not a wandering adventurer, but instead, the head of the Inquisition: a group determined to bring an end to the demon threat. You have authority: while you’re off completing quests you’re also able to send other party members out on missions. In this case, Leliana, Dragon Age Origin’s Orlesian rogue, has been sent in to infiltrate the Mage’s castle ahead of us.

But it’s a long way: and between us is a dragon.

It can be played as an action game: using skills assigned to hot-keys to punch, smash, taunt, fire arrows, and fireballs at the targets. And it can be played as a pause-based party RPG – the game’s tactical view functions like an upgraded Dragon Age Origins. Bioware seem keen to point out the tactical options made available: at one stage placing a tank class character between two barriers to block a choke point and prevent any danger reaching our ranged and mage characters.

The Dragon fight is long and savage. And it has to be said: the animations on the target are absurdly well realised. When under attack, the Dragon rears and scampers away. When it is on the offensive, it smashes down, sending rubble and debris across the battlefield. This is not like Dragon Age Origin’s tank and spank fights: at first the team concentrate on cutting the dragon’s legs from underneath it. Only then do they concentrate all their energy on the head. The killing blow comes from the team’s focus power: a reward for teamwork that unlocks high-power skills. In this case, bullet time: time slows for everything but the party, who fire everything they’ve got at the beast.

By now, the party has reached the Mage’s castle. But the scouting party has been captured, and our first job is to rescue Leliana, who is being tortured. Leliana vows revenge – she has been left brutalised.

When we reach the head Mage, we attempt to negotiate a stand-down, a peaceful resolution. But Leillana ruins the negotiation by slitting the throat of the Mage’s son. He, driven mad, opens up a series demon rifts. Fighting follows.

What struck me, at the end of the demo, is just how polished, creative, and well produced Inquisition is. After Dragon Age 2, I’d lost all interest in playing the series, and had treated Inquisition as little more than a curiosity.

But Inquisition looks exceptional. And I can’t wait to play it myself.