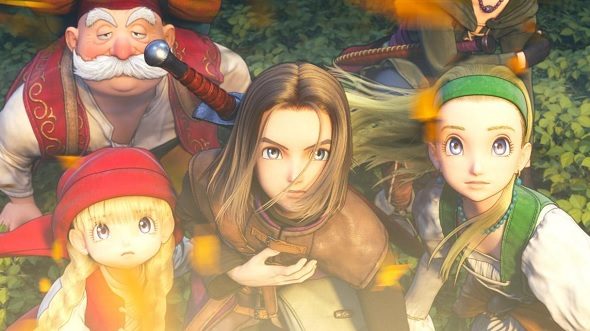 The Dragon Quest series has been going for over 30 years but is only now getting its first full-blooded PC release. About time! If you’re new to the games, it may feel a bit bold to dive straight into the series at Dragon Quest XI. But it’s not as daunting as it may seem as, thankfully, the stories between games aren’t linked so you won’t need to catch up on much lore.

All you need to know is that this JRPG puts you in the well-worn leather boots of a young villager who must bring together a band of adventurers to take down a dark lord, much as you did in Dragon Quest I – IX (we don’t talk about Dragon Quest X).

If you’re after more over-the-top action from Japan then you’ll need to play the best anime games on PC.

While I found much of what I played of Dragon Quest XI familiar and traditional, there are lots little innovations that make it a more welcoming game than previous entries in the series.

The most notable addition is voice acting, which didn’t exist at all in the game’s original form when it came out last year. The early signs are promising here, with a variety of regional accents in the mix, from the the tint of the West Country detected in your home village of Cobblestone, to the cockney guards in the kingdom of Heliodor. While voice lines are mostly reserved for the main story (regular NPCs sound off with a ‘pipipi’ sound when text scrolls – purists can opt for this entirely), it’s nonetheless a move towards how we’re used to hearing our game characters speak. 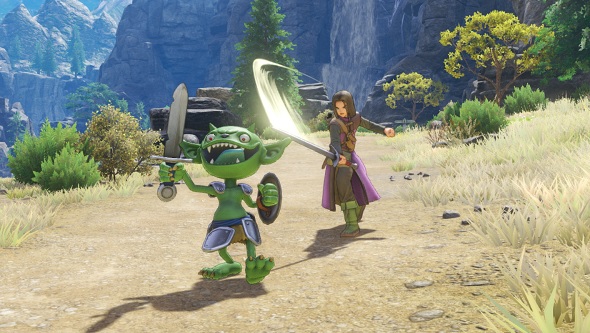 Of course, your bob-haired protagonist remains the silent type, but in perhaps a nod to Skyrim, you at least get to see events from his perspective thanks to a new first-person camera mode. If nothing else, it helps you better enjoy the detailed 3D environments and wonderful characters designed by legendary Dragon Ball creator Akira Toriyama. A zoom function also proves handy for spying treasure chests and other items twinkling in the distance.

But Dragon Quest XI’s most useful new mechanic is a sprint button that you can hold down to indefinitely zip across the game’s many huge locales. In the demo I played, that included Heliodor and the desert kingdom of Gallopolis. Traversal isn’t limited to sprinting your darn best either, as your parting gift at Cobblestone is a beautiful white horse that you can gallop around on across most of the overworld, and with no stamina limit. The only inhibition to this ability to ride wild and free comes when you participate in the horse racing minigame – you can’t have unlimited stamina then, obviously.

If the image of a hero on horseback overlooking grand green vistas has you thinking of The Witcher 3 or Breath of the Wild, you’ll be disappointed to learn that Dragon Quest XI isn’t open world. Bringing up the map at any point will show the clear boundaries of the area you’re in, certain paths narrowing while some are gated off entirely.

That’s not to say towns and cities don’t have plenty to explore or quests to take on. Heliodor provides a degree of verticality with some conveniently placed crates allowing you to jump up and run along the rooftops, tightrope walking between them. A day and night cycle – split into morning, afternoon, dusk, and night – also changes the daily routines and locations of NPCs.

Where Dragon Quest XI stays traditional to a fault is in its turn-based battle system, which is as old school as they come, right down to the no-frills UI and 8-bit sound effects. These battles areat least no longer sprung upon you through random encounters – approaching a visible monster in the overworld will cut straight to battle, though it means you can also go in for a preemptive strike. While riding your steed and knocking away smaller monsters is especially amusing, grinding battles is still key to levelling up you and your party. 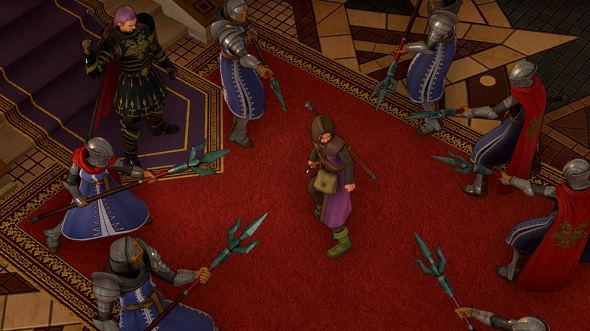 Don’t expect Dragon Quest XI to revolutionise the genre, then. This a notion cemented by the game’s story as it sees you yet again take up the role of the Chosen One. However, my demo concluded with a twist on that formula, in which the king of Heliodor locks the hero up in a dungeon, left to rot, after perceiving him as a threat capable of bringing about the Dark One.

I’m looking forward to see where the story goes from there. And so, with some welcome additions, and hopefully a good range of options for PC players such as the confirmed native 4K support, Dragon Quest XI could be the perfect entry point to what is considered Japan’s national game.