Dreadnought is a complex game, but it can be easily summed up in a brief bit of imagery. The starboard side of a 300-metre-long cruiser opens up, the barrels of six-dozen cannons sliding forward and rotating into firing position. Mounted on top of the cruiser is a tractor beam, which gently hums as it pulls an enemy ship into range. Then, with a mighty roar, the broadside fires, sending round after explosive round into the trapped enemy ship at point blank range. There’s no recovering from a salvo of that magnitude.

Into spaceships? Then you need to get up to warp speed with the greatest PC space games.

That’s what Dreadnought is. The bigger picture is that it’s a team-based multiplayer game where each player commands a spaceship kitted out with a variety of glittering weapons and gadgets. It’s been in closed beta for a few months now, but it’s still not on everyone’s radar. That’s going to change. Dreadnought has the components required to be a true free-to-play heavyweight.

“Imagine Battlestar Galactica, or Flash Gordon, or your favourite sci-fi piece. It’s all these great, bloody big ships that are just duking it out. That’s our game,” smiles Michael Donatelli, creative director at Six Foot.

On a simplistic level, it could be said that Dreadnought is a MOBA with spaceships. “You’ve got four abilities, a primary and secondary weapon,” details Jonathan Lindsay, executive producer at developer Yager. “But you don’t have creeps, so it feels different [to a MOBA]. It’s more about the core combat.” There’s no lanes, either (see Fractured Space for those), but the lengthy cooldowns on your ship’s abilities evoke the strategic play of League and Dota. 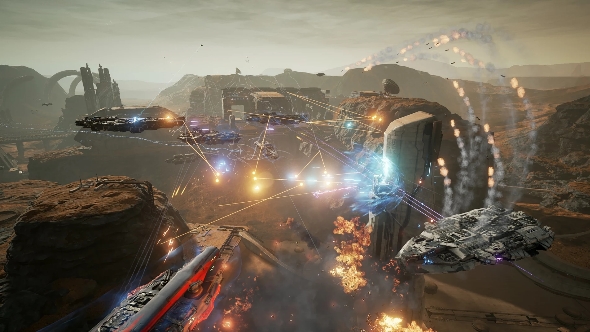 Spaceships are complicated beasts, and are fitted with very specific armements for very specific purposes (we should know, we did a Corellian Engineering Corporation factory tour when the Millennium Falcon was first built). As such, a match of Dreadnought is all about being familiar with your ship’s capabilities, and thinking how they apply to the current situation.

“It’s a deliberate game, its tactical when you fire,” says Donatelli. “When you see one of your teammates firing an EMP weapon at an enemy group, you think ‘this is my opportunity to fire a nuke’. And for the enemy, if they can get out of the way or if they can fire anti nuke laser batteries… it’s hyper-tactical. It’s just nuts!”

Due to the huge size and sluggish speed of Dreadnought’s mechanical behemoths, the pace of each match is significantly slower than most class-based shooters. This forces you to consider five steps ahead, as by the time you’ve pulled your ship into firing position and opened up the cannons, your enemy may have warped out of range. Forward thinking is key.

It’s also, surprisingly, a game about cover. Space-set maps are filled with floating debris, while those on planet surfaces have hulking wreckage or tall structures to use as shields. Attacking hidden enemies presents more opportunities than in other shooters though.

“You have 3D space, which is fun because if someone else isn’t prepared for you, you can get right underneath them and give them hell,” laughs Donatelli.

You can create a spaceship that’s uniquely yours 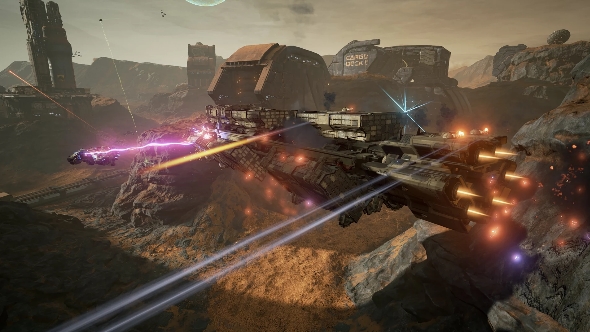 One of Dreadnought’s more familiar aspects is its class system. If you’ve played a lot of job-based shooters, its five ship types will feel broadly recognisable. Available to deploy from your hangar are a swift attacker, a colossal gun platform, a ranged defender, a healer, and a mid-sized all-rounder. Naturally these all come in lore-friendly guises that aren’t propped up by such gaming jargon as ‘support’ and ‘tank’.

“There’s the artillery cruiser, which is more or less a sniper. It’s got the longest range in the game,” says Lindsay of a ship that is, quite literally, a cannon with engines bolted on. “Then you have the dreadnought, of course. It has these Spanish galleon-style massive broadsides, as well as crazy stuff like tractor beams and warp jumps.”

Warp jumps are great fun: point your nose at an enemy, engage warp drives, and you’ll be sucked forward to re-appear right next to them. Then it’s just a case of unloading every bullet in your house-sized magazine, and getting out the way before they can retaliate.

“You have the destroyer which is a mid-ranged Jack-of-all-trades,” continues Donatelli. “And we have a corvette, which gets you around the map really fast and has stealth capabilities.”

“With the corvette you can equip it to be almost like the bird of prey,” explains Lindsay. “You can cloak and just unleash hell!”

Joining them is the tactical cruiser, an engineering ship that shoots a beam that damages enemies and fuses together the wounds of an allied ship. When all five classes (which are available in numerous designs and uncountable weapon configurations) are deployed, your team is incredibly powerful.

Aside from being powerful and fun to pilot, the ships are beautifully designed. Main menu screens are made up of 3D hangars similar to those from Stracraft II’s Hyperion, where you can zoom in on every detailed angle of your frigates. Every weapon bay can be refitted with numerous, fully-animated choices, creating a ship that’s perfectly tuned to your playstyle.

Be your own captain, and decide where to focus your progression 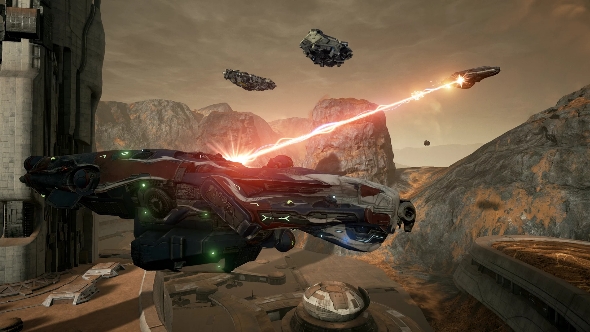 Right now, the closed beta ties progression to your captain’s level. Levelling up your captain by playing matches unlocks new technology for you to buy with earned in-game currency. Hitting a new level, for example, may unlock a new weapon module for the corvette, and two for the tactical cruiser. It’s a system that works, but Yager are planning to change it for a much more empowering version.

“One of the things that we’ve focused on in the last few months is what we refer to as progression 2.0,” explains Donatelli. “It’s a vertical progression that allows you to progress how you want. It’s more tech-tree based.”

“Before you weren’t necessarily unlocking things you really want,” adds Lindsay. “So maybe you want to focus on one class. With the tech-tree approach you can focus on what you want to unlock”.

Onslaught is a mode that lives up to the name 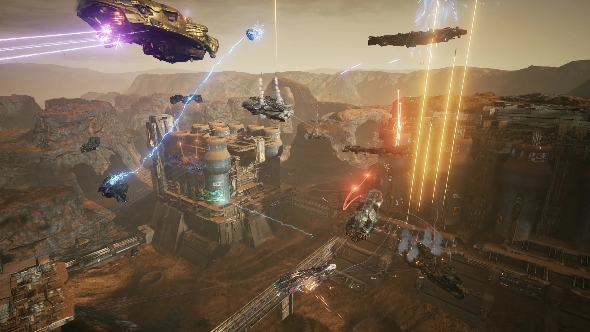 If you’re already familiar with Dreadnought, you’ll have played the basic 5v5 deathmatches that the closed beta offers. What comes next is a step up in space mayhem: Onslaught. An 8v8 affair, the mode also adds in small AI-driven fighter craft in a similar manner to Titanfall’s bot troopers. Having an extra six players, plus all those AI’s zooming about, creates a multiplayer scenario that’s as close to Battlestar vs Basestar cinema as we’re going to get.

While the core of Onslaught doesn’t seem that different to deathmatch, the presence of more enemies makes the battle more intense. There’s increased opportunity to keep the fire button held down, and the smaller AI ships are perfect fodder for the closer-range secondary guns. Flak clouds fill the screen as fighter squadrons swarm by, and smoke trails billow from rocket silos as dreadnoughts fire everything they have at enemy ships. Few free-to-play shooters are quite this visually spectacular.

Onslaught was previewed at Gamescom, but will soon be in players’ hands: “The new progression system and the new game mode will be in the next big beta push,” says Donatelli. “We have tons of people waiting to get in, but we want to get them in the new progression so we can get all the feedback from that. Open beta is right around the corner”.

To keep up with hulking great spaceship battles, head to the Dreadnought website, where you can sign yourself up for the beta, or buy your way in with a founder’s pack.