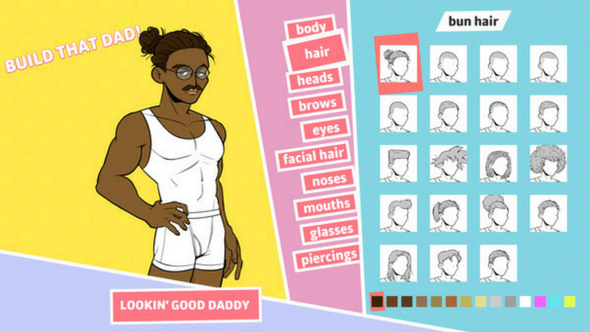 The Game Grumps have entered the game developer space with the impending debut of Dream Daddy: A Dad Dating Simulator.

Want more awesome indie games? Check out our list of some of the best indie titles on PC.

It’s exactly what it sounds like. It’s a visual novel-styled dating simulator that has you courting various other dads in the town of Maple Bay. Everyone who lives there is somehow a hot dad, and you’re going to have to decide which dateable dad out of seven you want to kick it with.

You’ll be able to choose from guys like Damien, Craig, Joseph, and other hot dads in-game, though what they look like is something of a mystery right now. Robert looks especially hunky, if the teaser images on the game’s Steam page is any indication.

There will be special dad-themed mini games, side quests, and various game paths to choose, as well as voices from the Game Grumps themselves and friends. You can even create your own “Dadsona,” as it were, with the character creator in-game.

The game releases via Steam on July 13. In the immortal words of Tim and Eric Awesome Show Great Job’s Pierre, I wanna meet that dad.