“Whosoever is delighted in solitude is either a wild beast or a god,” said ancient Greek philosopher Aristotle, almost certainly on the subject of co-operative PC gaming. Yes, I’m starting a preview of a geometric puzzle game with a quote from Aristotle. I know, I know – but I’ve done it now. Best just to go with it and vow to DM me something scathing on Twitter later.

Playing Dreii alone is fine. Its puzzles, all of which involve dragging and dropping shapes so that they reach pulsing dots, escalate imaginatively and are underpinned by a convincing physics model that’s had two years to mature on iOS prior to its eventual Steam release this autumn.

Its a therapeutic distraction populated by clean typefaces and attractive colour palettes that disclose design school sensibiities. Very Swiss. Very iOS. Which is to say, a simple, well-executed idea that doesn’t initially appear to have the complexity or slow-burn to justify its graduation to mouse-and-keyboard big school. 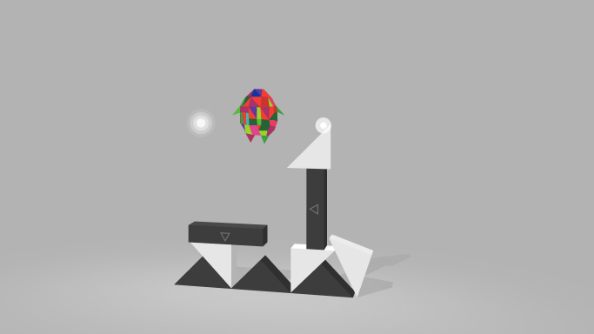 That’s how I had Dreii pegged after my first few solitary fumbles with its earliest two levels. But as Aristotle eluded to earlier, Dreii isn’t intended for solo play, despite being technically playable as such. It’s intended for gamers, and in our hearts we’re a social bunch.

Sure, we’ll sometimes bellow schoolyard disses into our headsets, but we’re also capable of collaborating on ambitious projects and daring plans, operating as more than the sum of our parts. It’s just that we need games to pretty much hypnotise the dickish impulses in us into submission in order to do so. In this case, it’s the air of elegance summoned by the visual design, the wordless communication system (you’re only able to send single words via a radial menu, like “Blimey!”) that encourage friendly collaboration. Importantly – crucially – though, there’s nothing mechanically stopping me being a godawful prick and sabotaging the other player’s efforts.

Dreii introduces multiplayer by covertly connecting you with other players and wordlessly dropping you into levels together, like a harried parent pushing you out of its still-moving car at the day care centre’s front door. It’s not even immediately apparent that the other multicoloured lantern-being chucking shapes around is actually another human and not a particularly proactive AI companion.

I mean, I know it’s a human because I’m literally sitting next to game director Christian Etter as we’re playing together, but if I were playing alone in my pants at home it’d take me longer to suss out the dynamic. I certainly wouldn’t know which platform my companion was playing on – it might be Wii U, PS3, PS4, Mac, Android or iOS. 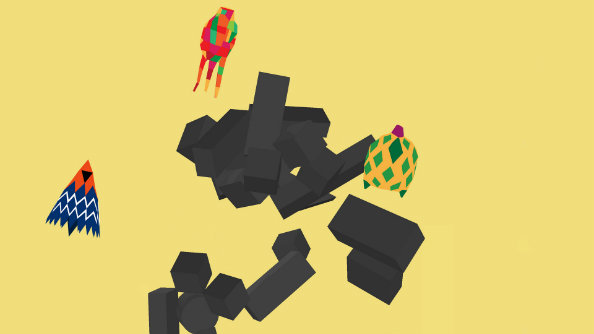 When three players get involved – that’s when Dreii really shows its hand, revealing itself to be as much a social experiment as a game. Again, there’s literally nothing stopping me being an unbearable tosser and lobbing shapes around at random, or pulling out the crucial foundation piece of a delicately constructed tower the other two players spent five minutes assembling, at the last, excruciating second. The fact that I’m sharing the same physical space and playing with the man who literally created the game probably goes a long way to quelling my more obnoxious impulses, but I like to think my desire to see a plan devised by floating origami-beings coming together would have over-ridden them anyway.

Those plans require increasing amounts of lateral thinking and co-ordinated movement as we progress. One level is periodically beset by a gust of wind that flattens our arrangements. Another requires a deft bit of bridge-building. Another still has us building around immovable, unhelpful shapes. I’m not saying I wanted to troll the other players every second. I’m also not not saying that. It’s a confusing feeling.

With a handul of shapes, none more complex than a triangle, and two other players depicted as art school doodles, Dreii plays host to complex things like peer pressure and accountability. I feel socially awkward playing it, but also a growing sense of comradery. Etter tells me that iOS players tended to play through the entire game with the same companions, in the same way PS3 exclusive Journey bonded its mute collaborators together.

My personal barometer for puzzle games is inexorably tied to my low frustration threshold. I am fundamentally stupid, and I don’t need you to remind me of that with your bloody relentless tests of logical thinking, games. Maybe that’s why I have such fondness for Dreii. Even more important than its attractive minimalism and underhanded connectivity is the fact there’s always someone smarter to help me out – and that I at least kind of know what we’re trying to do in the first place.

Dreii doesn’t have a specific PC release date yet, but expect it to drop on Steam at some point this autumn.