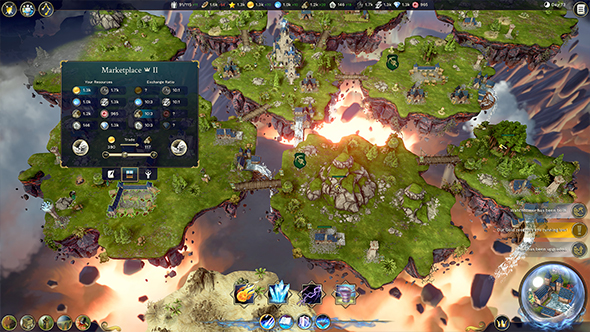 Sometimes you want the big picture, long-term strategy offered by a 4X game. Other times, you want the fast-paced tactical decisions of an RTS. Driftland: The Magic Revival puts both flavors of strategy into a single package alongside a dash of god game for good measure.

More exploration, expansion, exploitation, and extermination can be yours with the best 4X games on PC.

Driftland has you literally pulling together pieces of a world ruined by a magical apocalypse, expanding your civilization over a series of floating islands you gather over the course of the game. Magic lets you terraform and shift around those skybound plots of land as your territory expands, and those same floating isles make for a procedurally-generated map with loads of replay value.

4X commands and real-time battles all go down on the same map, letting you zoom in and out to keep track of your armies at every scale. You can even tame dragons to serve as steeds for your increasingly mighty forces.

Developers Star Drifters – based in Warsaw, Poland – have released Driftland on Steam Early Access today. The game currently features two of the four planned playable races, and single-player generated maps. Over the course of six to twelve months in Early Access, two more races, story campaigns for each faction, and online multiplayer will be added.