At first glance Drive Any Track is Audiosurf. You chuck music at it, it generates a race track, and you drive along to your favourite tune. Getting in the driving seat, you soon realise that this isn’t quite true. Drive Any Track has its own feel, and it’s one you’ll probably enjoy.

The game’s about to head into Early Access, so I took it for a spin to see how it handles. 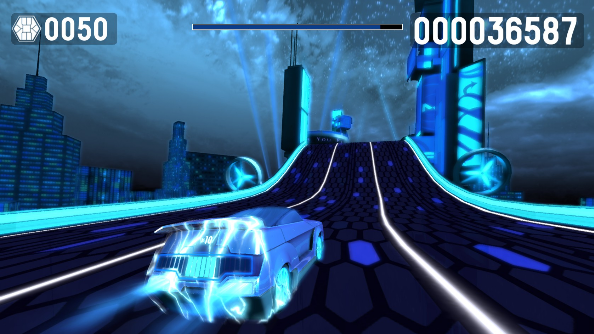 The very first thing I noticed when trying to play Drive Any Track is that I don’t really have digitally stored music anymore. Where once I used to have folders upon folders of MP3s, now all I have is the Spotify client. Drive Any Track needs to be fed with files: there’s no support for streaming services. Thankfully I have a lone, sentimental MP3 album on my hard drive. It’s a compilation album of David Bowie singles. Time to take Ziggy Stardust to the races.

Starting slow, I fed Ashes to Ashes into the game. The track it builds is clearly influenced by the Wipeout games; a wide highway suspended high above a city. The countdown signals me to be ready, and we’re off. As you speed along the highway a set of horizontal lasers mark the pace. Stay within them and you’re in sync with the music. This gains you a multiplier, and the longer you can stay in sync the better your score.

Ashes to Ashes produced a lazy ride; a meandering snake of slow bends and a couple of humps. For round two I threw in Heroes, which has some nice pacy sections around the chorus. These produced some wonderful lifts in the road, with numerous humps to dash over and a couple of ramps for stunt jumps. They are the kind of obstacles that make it tricky to pick up the coins and boxes that lie on the track like Mario Kart pickups. Collecting them can help you power up a boost, or save money for new cars. 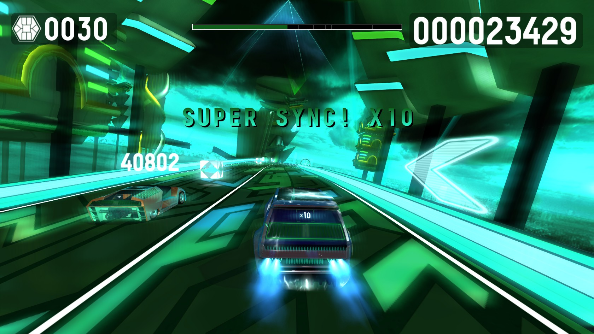 I gradually ramped up the pace with Young Americans and Let’s Dance, but it was the finale to Modern Love that really showed off what the game’s procedural track generation is capable of. Analysing Modern Love’s significant pace jump, Drive Any Track created a twisting hazard of loops, chasms, crash-barriers and jumps that were dizzying to navigate. I found my car hurling off the edge more times than I’d care to admit, and the game constantly reminding me how many bars I was behind. Six attempts on, I’ve still not managed to keep in time for longer than 60% of the track.

The Early Access version is pretty barebones, with fourteen cars and three styles of tracks. But the handling model of the cars is complete, so really it’s the tracks you pump into it that make all the difference. The game’s due to be finished up by October, with updates along the way.

If Audiosurf was music to your ears, then Drive Any Track may well be your new jam.