Drive Any Track is an early access racing game that turns any MP3 into a unique track using unknowable computer magic.

That is to say, it transforms a music track into a racing track, before letting you drive all over it. Whoever at developer Foam first figured out the name probably spent the rest of the day down the pub.

The game feels like an Audiosurf that’s been taken off its rails, with cars that can freely powerslide around corners, jump over ramps, avoid barriers and activate speed boosts. You do all of this to the funky rhythm of the beat and such, picking up all manner of floating jobbies as you go, and by racing well you keep in sync with the track that’s currently playing. The arcade handling, though simple, is surprisingly satisfying and sits somewhere between Ridge Racer and Wipeout in terms of going sideways around corners.

Like so many rhythm action games, it makes a lot more sense once you’re in control of it, and your brain becomes naturally delighted by simple sights and sounds synchronising before your eyes and ears. Have a go on this video, it should half a similar enough effect..

The game’s MEGA engine is the trick behind its clever track creation, and it seems to have a grasp of which features of track should match up with which bits of music. If you’re a fan of any genre of music that might contain a “drop”, then you’ll find that the track will quite literally send you flying off a physical drop that lands just as the track kicks in again.

Choruses tend to become vast, sweeping corners. Slower songs feel more meandering and are simpler to handle. More intense numbers are, as you’d expect, harder to race on. The conversion engine is more than just a fancy visualiser; it makes playable, challenging courses that make real sense in an arcade racer. And it really is taking all of its cues from the audio information it pulls from the music file: the developers promise me that John Cage’s 4:33 produces a perfectly empty track. 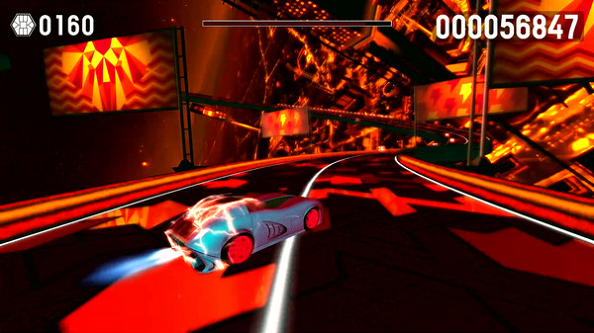 There are some hidden easter eggs. The Power of Love unlocks a DeLorean, and you might guess which Fleetwood Mac song will give you a Formula One car. More broadly, the engine will use the genre of the song to create the environments outside the virtual tarmac itself, as well as decide which car you’ll be racing with.

Leaderboards are split across genres and ghost data can be used, but you can only race on the music that exists on your hard drive, like how it worked in the olden days. For many that might be a limiting factor, with Spotify kicking everyone’s doors in and streaming music down our throats and eroding the very notion of music once and for all. But if not (maybe you’ve discovered some cool and interesting ways to download MP3s from the internet, who knows), then Drive Any Track is worth a look, even in its pre-release state.