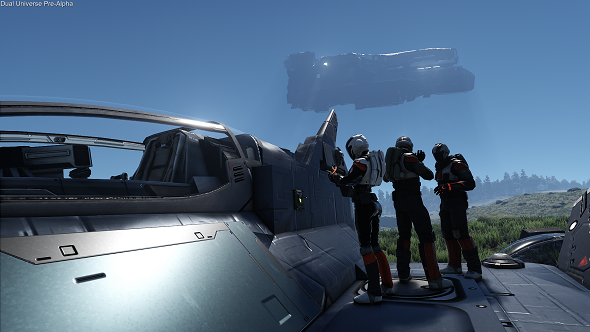 Imagine a game where you can fly from the surface of a procedural planet and head straight into space without a single loading screen. Oh, that’s been done in a couple of games already. Ok, right, imagine that, but also Minecraft. Now picture that in your mind, filled with player-made space stations, ships, and cities, with a million people all sharing the same space, complete with in-game factions and systems as complex as Eve Online. Welcome to Dual Universe.

If waiting is not your thing, we have an extensive list of existing space games.

With Dual Universe, developers Novaquark want to combine the emerging space sim genre with the voxel building of Minecraft, the single-server tech wizardry of Worlds Adrift, and the living economy of Eve Online. They want to let us build a sprawling metropolis on a planet, skyscrapers jutting out of the landscape, with the construction visible to unwanted pirates observing from a space station hanging in the black above. All this will be completely persistent, so the hundreds-of-thousands of players sharing this universe can each leave their mark.

Despite those Minecraft comparisons, though, Dual Universe will offer a more visually realistic world: it won’t just be cubes. In fact, every shape – even spheres – is represented in the building tools, and you’re free to dig out and place them as you see fit. You’ll also be able to easily show your creations off. 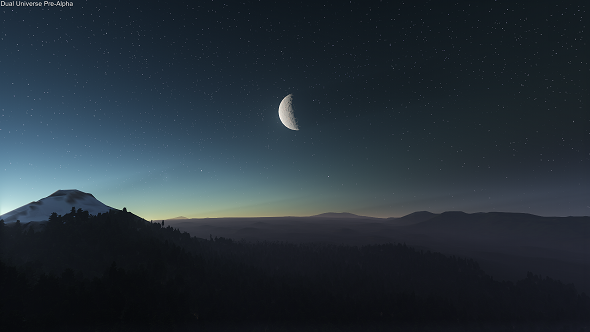 “The problem with Minecraft is that you could build a beautiful castle and almost nobody sees it, so there’s actually no meaning in what you’re doing,” creative director and Novaquark founder Jean-Christophe Baillie tells us. “The problem with Eve Online is that everything you encounter is beautiful, but it’s limited. It’s a limited set of shapes and things you could possibly discover. We joined these two concepts into one single concept where you can build all those things, share them with everybody, and everyone is in the same world at the same time.”

Of course, there are problems to consider with this being an online game, one in which other players can – and definitely will – come and destroy all your hard work. Fortunately, the game will ease you in, its introduction kicking off with a safe zone where you can go wild without fear of attack. Probably best to make this your base, then.

“Nothing bad can happen to you there. Nobody can break or steal your stuff,” Baillie explains. “Of course, there won’t be any interesting resources over there, so if you want to secure a more interesting area, you’ll have to go beyond the safe zone. Then, potentially, someone can destroy your stuff.” To stop you getting raided as you sleep – like in Ark – you can also deploy protective bubbles over your construction – these give you 24 to 48 hours to react to an attack, allowing you to negotiate with diplomacy or aggression. On top of that, you can take snapshots of your creations so you can easily recreate them. 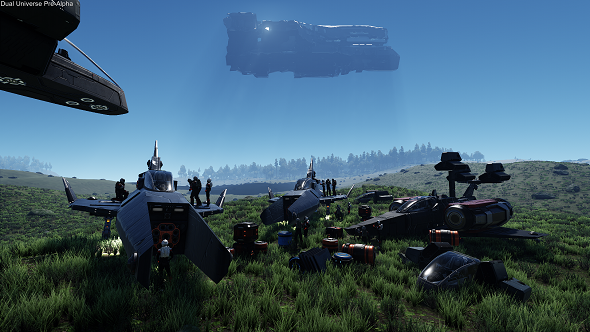 “You won’t lose your intellectual property,” Baillie says. “Your ships being destroyed will cost you a lot of money in-game, or a lot of time to mine resources to rebuild it. You don’t lose your design or all the effort you put into making this ship look really cool. This is fundamental – you can’t have that being destroyed. That would be unacceptable.”

While Dual Universe’s environment isn’t built of simple blocks, it won’t boast the hyper-realism of Star Citizen, either. Space won’t be a vacuum, so a shot that pierces your hull won’t drag you out into the cold to die. You will, however, be able to staff your ship with other players, so that friends (or strangers) operate the guns and scramble to repair damage as you pilot the hulking behemoth. Being entirely player-built – the functional components glued together with building blocks – these ships can be as huge as you want, too.

The tech that powers all of this was built in-house and is called CSSC – the Continuous Single-Shard Cluster. There’s no loading, and there aren’t any queues – it intelligently points the servers to where they’re needed, freeing up assets in static space. “It’s an old idea that was technically very difficult to make, and it needs modern infrastructures,” Baillie explains. “You cannot play Dual Universe with a PC from the year 2000. We live in a world where we can rely on more power, and we use this kind of [modern] technology. That’s the vision.” 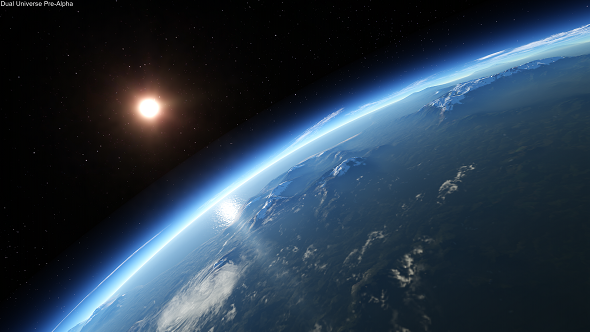 Now comes the million dollar question: what do you do in it? This is a conundrum that’s plagued modern space sims. Once the novelty of the scale fades, you’re left with an impressive, albeit empty, space – quite literally. Dual Universe could well suffer the same problem, but the power to change that is in the community’s hands.

You see, Dual Universe won’t have quests. Instead, it will have a player-driven job market. Perhaps you’ll end up being a repairman or a gunner for a wealthy player, or maybe you’ll lend out your services as a master builder, sharing your architectural creations with the world. Real-world programmers can also code their ships to run minigames, maybe roaming the world as a ronin indie dev, installing Tetris onto players’ ships. You can create automatic landing or mining programs. Or, you know, if you just like to wreck the creations of talented folk, you can be a pirate or something.