Ain’t nothing wrong with repping for the old school, at least as far as first-person shooters go. Last year’s Doom revival brought us an arena-centric spin on the venerable DOS classic, Quake Champions is teaching us what it means to frag again, and roguelike hybrid shooter Strafe… didn’t quite hit the mark, admittedly. One game that does understand the spirit of old-school FPS design, though, is Dusk, a recent arrival on Steam from New Blood Interactive.

PC games don’t die, they just get remastered. Check out some these old-school classics.

Inspired primarily by the original Quake, but with thematic cues taken from elsewhere, Dusk understands the joy of the perfect bunny-hop, the energy of a rocket jump that sends you halfway across the map, and the quiet thrill of picking apart the surprisingly complex and interwoven levels for secrets, rewards, and easter eggs. As a lifelong fan of old-school shooter design, I’m very happy to say that this one gets it. The weapons are solid, the enemies are numerous, and the controls are tight as a drum.

While familiar in style and theme, Dusk does a good amount to separate itself from its predecessors, with playful design that encourages you to sequence-break or even avoid combat entirely in the pursuit of achievements and bonus goals. Despite the grim and blood-splattered setting, Dusk has a vein of humor running through it, with playful quirks such as a bar of soap hidden in every level, that – if thrown – instantly kills whatever it hits, including bosses. They do say that cleanliness is next to god mode, after all.

The publisher was kind enough to send me a preview copy of the first episode shortly before it went up on Steam, and while the full game may yet find a way to disappoint, I am very happy with what I’ve tried so far, with minimal gripes. Mainly that I think they’ve possibly gone a teensy bit too far on the old-school in terms of graphics. Not even Quake’s enemies were quite this blocky. 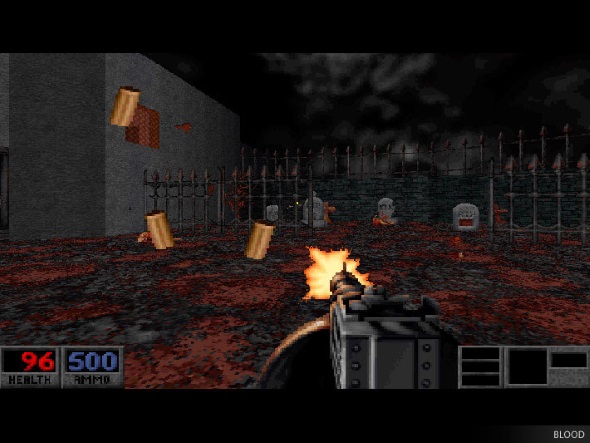 While Dusk is mechanically most like Quake, it takes its thematic cues from Blood, Monolith’s venerable 1997 Build engine FPS. Of the big three – Duke Nukem 3D, Blood, and Shadow Warrior – this is my favourite, and revenant cowboy Caleb is the most enduringly charming of the protagonists, not having to rely on stolen Bruce Campbell quotes or lazy racist caricature to shine. Plus, Caleb has a thing for classic showtunes. How can you not love that?

The thing holding Blood back from modern fame is that, while Duke Nukem 3D and Shadow Warrior have both got official HD re-releases AND modern reboots (although the less said about Duke’s return, the better), Blood has remained stuck as a DOS game, playable only through emulation even in GOG’s release of the game, until now. After 20 years, Blood finally has a source port. Two of them, in fact.

If you want to play Blood right now – and you should, because it’s a unique and clever FPS with intricately detailed levels – your best bet is BloodGDX, a recent engine port, a new version of which rolled out just this week, adding official support for the Cryptic Passage expansion, as well as a slew of bugfixes. While it does require Java to be installed, usage is as simple as unzipping it to your Blood directory and running the .jar file. With full high-res and widescreen support, this is the best way to enjoy the game. For now.

Looming over the horizon is Blood EX, a project by Samuel ‘Kaiser’ Villarreal, the engine-coding demon that Night Dive Studios keep locked up in their basement. Among his most recent work are the PC remasters of the original two Turok games, the Steam re-release of Strife, as well as unofficial ports of Doom 64 and Exhumed (aka Powerslave in some regions). His work porting Blood EX seems to be a just-for-fun endeavour, so there’s no release date set, but I’d wager on it being a more polished and professional showing than even BloodGDX.

To top it all off, Blood is even seeing a resurgence in modding. The biggest and best of all Blood mods – the fan-made expansion Death Wish – is due for a major update this October, most likely on Halloween day, and a bundle of new and variant weapons was released for the game just the other day. Caleb lives…. again.

Dusk is available for pre-order now at £15 on Steam, getting you access to the first episode now, and the remaining two thirds of the game when it launches on Halloween, October 31st.

Blood is available via GOG for £4.69 and comes bundled with the official Cryptic Passage expansion.