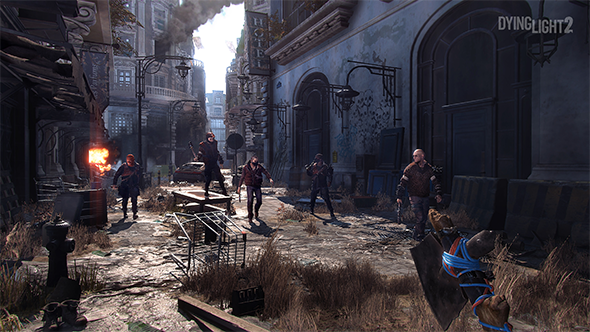 Like the original, Dying Light 2 will have four-player co-op but, because the sequel is so radically different from the original, it had to be changed so that one player hosts and the other three enter that player’s game.

The big innovation of Dying Light 2 is that your actions have consequences that affect the city. If you help one faction then they will flourish and make their mark on the city, painting it in their colours, opening up parkour routes, and – depending on the faction – set up useful fronts like water points and crafting stations. But, while one faction flourishes, other factions may recede. This means that the city in your game may vary wildly from the city in your friend’s.

Dying Light isn’t on our list of the best multiplayer games, but maybe it should be…

“The choices and the narrative and the consequences you have in your own game are really huge and your friends could have chosen differently,” producer Malgorzata Mitrega tells us. “So in Dying Light 2 co-operation mode will have a host.”

Players entering the game will still have their progression but they may not be able to use all their weapons because if you previously chose some other path on some level you might not have access to it in your host’s game. It’s still being worked out, “so it’s too soon to judge,“ Mitrega says. “[It] is important to still make it fun but not to spoil the fun.”

It’s not all been worked out but with Dying Light 2’s release date set for next year, the team still has time to work out the kinks.

This also opens up the possibility of playing “with your friends again in the same area of the city and thinking ‘I don’t have that, what have you done here? I don’t have it in my way’.” Mitrega says. “It’s really because the choices vary on many levels, we hope each player will have a unique experience.”