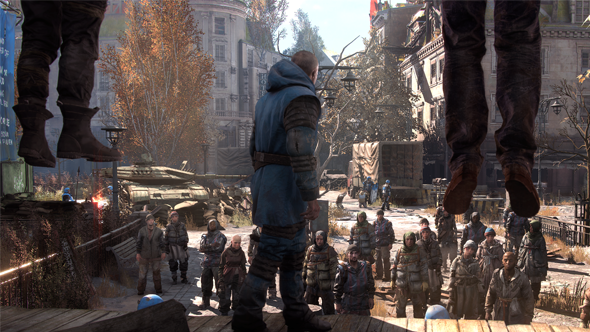 Dying Light 2 has just been announced on stage at the E3 Microsoft conference by Chris Avellone. As you’d expect, parkour returns to the first-person zombie series, along with the crucial day/night cycle that controls when the zombies come out.

Avellone stated that the game is the “first in its genre” to ensure that your choices will have an impact on the world of the game. You’ll potentially play alongside the PeaceKeepers, in a city in the grip of what Techland has dubbed a “modern dark age,” with medieval approaches to law, order, and punishment.

It’s not clear where Dying Light 2 is set, or when it comes out, at this point. The trailer showcased a location that could have been a number of places – the original Dying Light was set in the fictional city of Harran (which was the name of another city in Ancient Turkey), but it didn’t look as though that’s where we’d be heading for the series’s second outing.

I saw something that looked a little like Paris’s Arc de Triomphe, but there were no other Parisian landmarks on show in the trailer, so I wouldn’t state that the new game will be set there with any particular confidence.

There are two Dying Light videos for you to fest your eyes on. The first is the announcement trailer:

The second shows off some Dying Light 2 gameplay:

Specifically, it shows off the game’s returning parkour, as well as offering a closer look at the game’s setting, which Techland describes as “a decaying city.” There’s also a look at the narrative choices that will impact the way your city grows and changes over time.