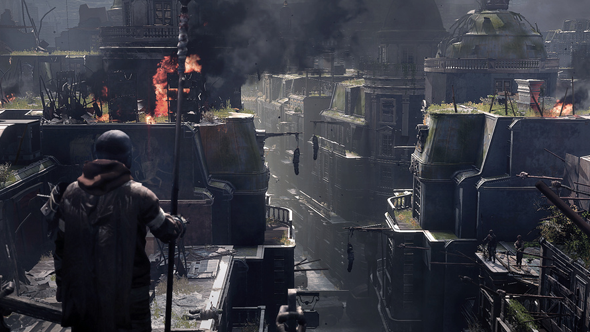 The map in Dying Light 2 is four times larger than all of the maps from the original game combined. The information came from a presentation at E3 2018 given by the game’s producer, Tymon Smektała.

While Dying Light took place in the fictional Turkish city of Harran, Dying Light 2 has moved further West, and according to Smektała, is set in a “fictional European metropolis, once prosperous, but now probably the last human settlement struggling to survive.” The city is yet to be named, but it looks to be far more expansive than Harran.

Check out our list of the best zombie games on PC.

Smektała says that “the city is sprawling,” around “four times as big as all of the maps from Dying Light combined.” That’s impressive, as there were three maps in Dying Light, between the Slums, Old Town, and the map from the 2015 Following expansion (which itself was twice the size of the areas from the original map). Going the estimation of some fans, that means the new map could take more than two hours to walk from one end to another.

While you might be worried that that could mean empty space, Smektała is keen to suggest that there’s plenty to do in the new city. “You can go to each of those places and find new people, new locations, new quests […] this is a huge game, and it offers a lot of replayability,” he says.

That’s clearly a reference to the game’s branching narrative structure, which sends you all over the city as you choose your path through a city in the grip of a modern dark age. The Dying Light 2 release date hasn’t been confirmed yet, but the E3 trailer we saw looked pretty far along, so hopefully we’ll see more of Dying Light 2 pretty soon.