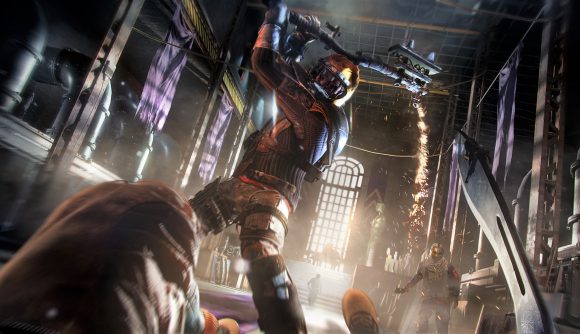 There seven different regions in Dying Light’s The City setting, and each will feature a unique style of parkour. While the moveset you build as you progress through the game won’t change region to region, the challenge you face will vary a great deal.

In one area, for example, everything is rickety and crumbling, making it dangerous to put your weight on platforms, and changing the routes available to you as your clodhopping exuberance breaks the world around you.

In another, flooded district, water reaches the second storey of buildings, removing street level from the equation. Floating platforms that move across the water offer a chance to stay dry as you move, however. Yet another section has particularly slopy rooftops – possibly around a big church we spot in the distance during the demo – which presumably makes getting any purchase difficult.

You’ll have a bunch of new moves to help you with these fresh challenges, however. Aiden is even more sprightly than Dying Light’s Kyle Crane, and can jump much further. His long jumps see him soaring through the air between buildings, while he’s also able to squeeze through smaller gaps if another route blocked.

Even more entertainingly, he can grab the lapels of a zombie and sail down substantial heights, using the squishy mass of his victim to break the fall at the bottom.