Update January 31, 2017: We originally published this feature on the day EarlyNinja’s Kickstarter went live, but took it down after a number of developers voiced concerns that their games were being used by EarlyNinja without their consent. We’ve since reached out to marketing manager Andrea D’Agostino for comment, and he provided us with a full statement clarifying the situation, in additon to the company’s blog post which aims to do the same.

“It was never our intention to provoke or offend developers by proposing images of their games,” D’Agostino tells us. “We sincerely apologize for having done this. Our intention was to use the voting portal, which is nothing else than a poll, to gather user preferences on the games they’d like to have on the platform once live.

We never hinted to have those games already on board or to have agreements with developers.”

Original story: It’s not controversial to suggest that a certain proportion of gamers are unhappy with Steam Early Access. The service, which allows people to buy and play incomplete games to help fund a developer, has a diverse collection of stories ranging from super successful to disappointment and even deceit.

So just what is wrong with Steam Early Access? Brighenti is pretty clear, believing the system is flawed for both gamers and developers.

“The biggest issue that gamers have right now is that they are investing in the developers, but they don’t have any way out if something goes wrong,” he explains. “Right now you spend your money and it’s like gambling on the developers. You don’t know when the game will be finished or when to expect the next major update.”

And for developers, there are challenges regarding promotion and quality control. “The biggest issue developers are facing right now is the chance to get their games discovered by gamers. At the moment on Steam Greenlight there are a huge amount of shoddy titles, and there is no control over the quality of them,” says Brighenti. “It’s very difficult for developers to emerge from all the other games.”

How does EarlyNinja aim to fix these problems? 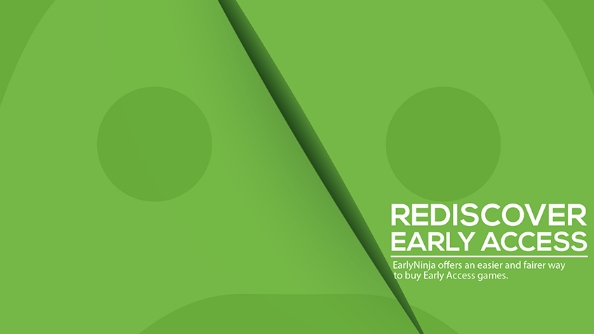 So exactly what does Brighenti intend to do by way of a remedy? The answer is EarlyNinja, an early access platform that makes the most of his experience in project management. Developers who wish to use the system will be required to provide not only a quality game, but a work plan to ensure the game has a good chance of success and purchasing players know how long is left until the final build.

“We ask our developers to split their major releases into components and clarify to the users when they can expect a single component will be finished,” reveals Brighenti. “On our product page we have the project status, which shows in a basic way where the project stands: when was the last update, when you can expect the next update, and when the final update will be.”

While the system has these milestones, they’re not set in stone. Brighenti realises that a team of indie developers may encounter problems along the way, so there’s no punishment for an EarlyNinja user should they slip up.

“We understand developers can face difficulties and delays. This is not an issue. This is not even an issue for gamers,” states Brighenti. “But the community, the customers, must know that developers are suffering a delay.”

“We want to give transparency to our users. We as gamers, since we are putting real money into buying a prototype, at the very least should expect to get a little information from developers,” he says. 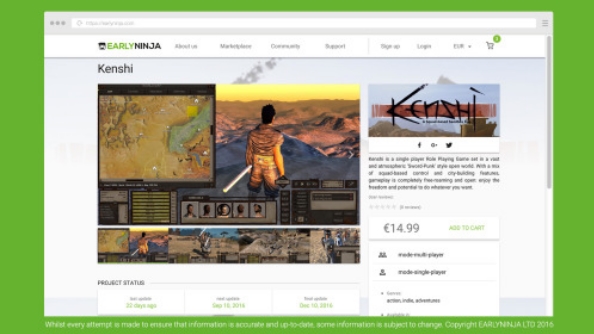 So you’re a developer who wants to get going with an early access game, and you decide EarlyNinja is the system for you. How do you go about using the platform?

“We have a three-step process,” reveals Brighenti. “First we run a diligence check on the developer. We want to be sure that they’re trustworthy because we want to avoid putting games made by scammers for sale.”

With a background check completed and approved, you can then upload your assets and information onto the EarlyNinja system. Central to your product page is a week-by-week roadmap detailing when players can expect features and updates.

Each of the milestones on the roadmap are ‘weighted’ at a monetary value. When the corresponding area of the game is completed, the developer gets paid that value by EarlyNinja. “We are not releasing all the payment up front, it will be in instalments,” explains Brighenti. When a person buys a game the money goes to EarlyNinja, who then pay the developer with chunks of it as they hit their milestones. 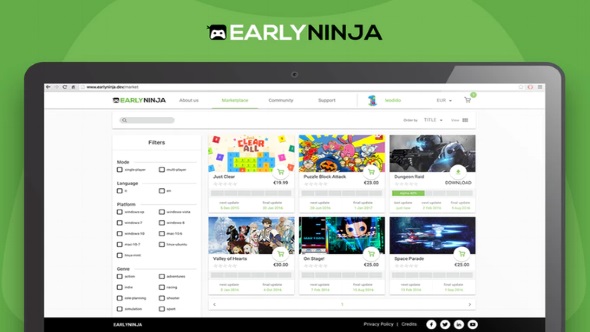 The third step is a rigorous quality control process. “Once we receive the game, we test it internally,” Brighenti says. “We have an in-house team of QA testers and we also use an external company based in Canada that technically test all the mechanics and look for game breaking bugs.”

The QA process is important to Brighenti. He doesn’t ever want to see EarlyNinja fall into the ‘quantity over quality’ pit, and so will always remain tightly selective on the games he features.

“We don’t want all early access games on our platform, just a few of them,” he points out. “We want to be sure that there will be quality to the games. We don’t want just recycled assets taken from the Unity store and that’s it.”

Should a developer pass through all three of the EarlyNinja gates, then their game can be put on sale. Naturally the service comes with a fee. “Our cut will be 15%, which is way lower compared to Steam and GOG,” Brighenti notes. “We are asking for a lower fee because we don’t want to hassle developers. We are releasing their payments in instalments which is pretty important for them, so we are OK with keeping our fees lower.”

One of the major elements of EarlyNinja is the guaranteed refund for customers. In direct opposition to Steam, you can get a refund at any time, no matter how long you’ve played for. There are restrictions, however.

“The refund is delivered as a partial refund when a game is dropped or excessively delayed,” Brighenti explains. “This means that users may ask for a refund, but they will never get their money back totally. If a game was at the 50% mark and dropped at that point, gamers will receive 50% of the money back.”

There are exceptions, though. “We do also have a refund policy that covers the whole price of the game that acts within 15 days of purchase. For example if you don’t like the game or it runs badly on your system you can ask for a refund and you’ll get all your money back,” Brighenti notes.

If you want to use EarlyNinja you can, right now, by heading to the EarlyNinja website. But Brighenti wants the system to be more than just a website; he’d like a desktop client platform too. Just like Steam.

To make that dream a reality, EarlyNinja have launched a Kickstarter campaign in order to raise the required funds. If you yourself are a developer with interest in Brighenti’s new approach to early access, backing the Kickstarter could be beneficial thanks to the campaign’s backer rewards.

“The most important thing we can offer is a discount on our fees,” states Brighenti. “It depends on the level of the backer, but for example you can get a lifetime 5% discount on all your games submitted through Early Ninja.”

As a company only recently starting out, there’s a long road ahead for Brighenti and EarlyNinja. But they don’t want to destroy Steam, they just want gamers to be treated fairly.

“I just think that the Early Access model isn’t fair for gamers right now,” laments Brighenti. “We don’t want to be like Steam. We want to take early access out of Steam and try and do something a little bit better.”