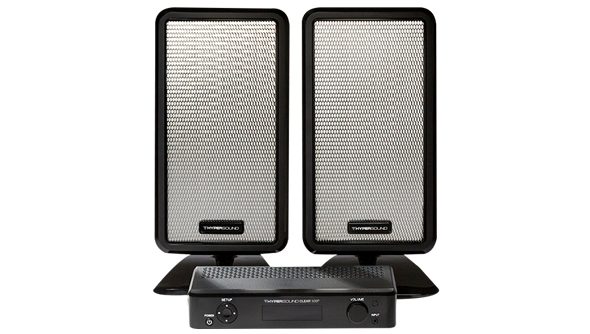 Hypersound is a new kind of speaker system invented by actual wizards, that uses magic to create a sound that can only be heard when standing in one spot in the room. Take a few steps to the side and the sound vanishes entirely. Stick your head back into the invisible audio bubble and you’ll feel like a ghost has slipped a spectral surround sound headset over your ears.

It’s the most uncanny thing, a kind of sound that’s entirely counter-intuitive and in abject defiance of any understanding of how a speaker system should work. Instead of sounds coming out of a box and travelling across the room to your ears, they spring forth from a spooky spot of seemingly haunted air. 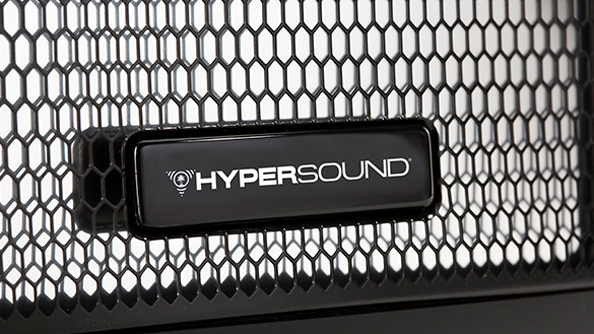 The technology on which Hypersound is based was created decades ago by serial inventor (and not an actual wizard) Woody Norris, and its applications vary hugely. For example, the speakers are already being used in stores in the US to advertise Call of Duty solely to any person standing in front of a cardboard cutout of Kevin Spacey, much to the relief of store staff who no longer have to hear the same ten seconds of audio repeated a thousand times during their nine to five shifts.

There’s military application in weaponising this sort of highly directed sound, which is mildly terrifying, but the more noble use for Hypersound and the area in which its being commercially focused is in assisting those with hearing loss. Hypersound can create an area of the room in which, for example, an entertainment system’s volume is doubled, allowing those with and without hearing loss to watch and listen together without the use of a more personal and less reliable hearing aid appliance.

That’s why Hypersound is to be sold into private, high street audiologists. Hearing loss is increasingly prevalent among younger men and women, and solutions like these physics-defying speakers can present a less intrusive and slightly cooler solution than the current alternatives. 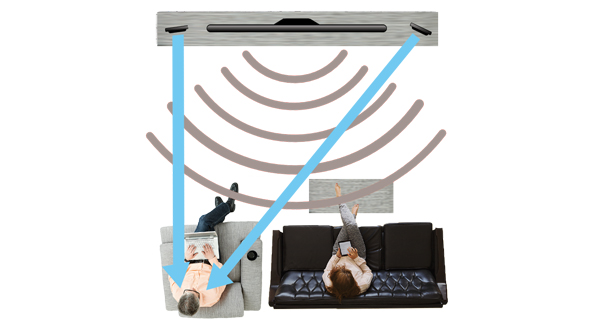 The speakers themselves come as a set of two emitters and an amplifier. The emitters resemble a pair of A4 sized mirrors and work by creating an ultrasonic carrier signal at 44 kilohertz — way beyond the hearing ability of even the cleverest dogs — that can be directed into a straight beam. This invisible, inaudible tube of primed air is ready to have a source signal modulated on top of it. As the source signal comes off the face of the emitter, it travels through the ultrasonic carrier signal and becomes audible at a distance four to six inches from the speaker’s surface. The sound then continues down this long, narrow beam.

Nope, I’ve no idea either. But after this, you’ve got yourself a tube of sound. Inside the tube you can hear whatever signal is being modulated. Outside of it you hear nothing. It is, to put it overly simply, a laser for sounds.

Turtle Beach, who are marketing and producing the Hypersound tech, first demonstrated the speakers by plonking me at the end of the table and firing lots of different sounds at my disbelieving face. Sitting about fifteen feet from the speakers, the actual sound seemed to be emenating from a point about a foot in front of my nose.

A sheet of A4 was placed in front of the left speaker, creating a bizarre sensation that my left ear had suddenly been stuffed with cotton wool. Standing up the sound became barely audible, instead seeming to come from behind me, where the tube of ultrasonic was bouncing off the large office window. These weren’t ideal conditions, I was told, but the effect was still astonishing.

Here’s Woody Norris, talking about his inventions in a captivating manner.

Distance from the emitters doesn’t affect the loudness of the sound reaching your ears either. As long as you’re within the magic tube of sound, you’ll hear that sound at a constant volume. Out in the car park I was instructed to march around for a bit while they beamed music at me. Pink Floyd would fill my head at random spots on the tarmac, something that would’ve been incredibly confusing had I been unaware that somebody was using an ultrasonic sound cannon. Hypersound definitely has the capacity to be used in long-distance pranks.

The tech’s application in games goes hand in hand with its application in helping with hearing loss. And this earphone-wearing, games-playing, tech-loving, rock and roll generation is statistically prone to having totally battered ears. The retail application seems a little more devious, in so far as it gives advertisers the ability to non-consensually slip a pair of invisible headphones over your ears.

But hey, tech is neither inherently good nor evil, and these magical, wonderful, spellbinding speakers are as amoral as they are binaural. And the man who demonstrated it to me seemed kind. So I’m all for it. Let’s start beaming sounds everywhere. It’s the future.