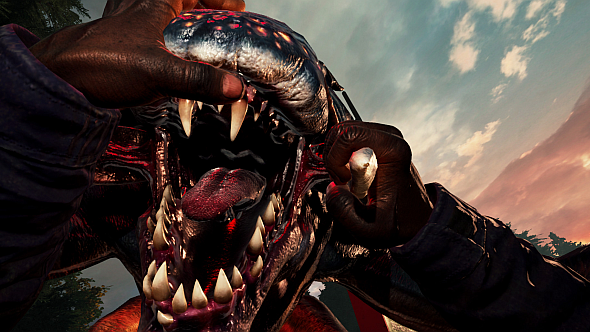 Typical – we write about how there aren’t enough co-op horde games like Vermintide, and just days later the developers of Earthfall announce that they are preparing to launch out of Early Access this spring. London buses, and all that.

For more jolly cooperation, check out the best co-op games on PC.

Set in the diverse terrain of the Pacific Northwest, Earthfall is a co-op shooter for up to four players in which it’s up to you to defeat an alien invasion. You’ll use modern weaponry and tactics, including the ability to fortify locations and create choke-points with portable barricades and heavy turrets.

So if you prefer aliens, shooting, and manual labour to fantasy, rats, and melee, Earthfall may scratch that Left 4 Dead itch better than Vermintide 2. Developers Holospark even promise a complete story mode, where you’ll learn the reasons for the aliens’ invasion. That’s right: villains with a motive.

As in Vermintide and L4D, there will be several varieties of alien and an unpredictable spawn system to keep things fresh. For more, check out Earthfall’s Steam page. It’s in Early Access now, but if “spring” is its full release, that’s just weeks away.