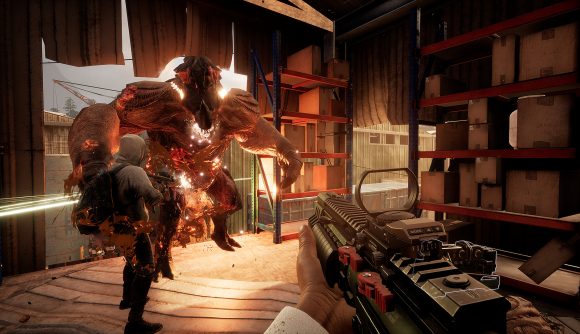 Blast! Aliens have finally landed on Earth and they’re not the friendly type. Of course they’re not. Never easy is it? Someone’s gotta deal with them now before they all guff and pus all over the place. Blast it all to smithereens! Well, it’s no good sat here complaining about it. It’s time to leave the comfort of your home and venture out into the world to shoot the slimy invading meatbags before sundown. No such thing as a quiet day, is there?

This is probably how co-op first-person shooter Earthfall begins. It’ll be noticeably less British than that given that it’s set in the Pacific Northwest, but it probably goes something like that. For this is a game all about shooting aliens because they’ve landed on Earth angry and can’t stand to look at you. Think of it as Left 4 Dead but instead of zombies there are screeching extraterrestrials to deal with. Lovely.

If that seems like something you’d be up for playing then you’ll want to purchase it on Steam immediately. Otherwise, you can enter our giveaway for the game below. We have 20 Steam keys for Earthfall so make sure you throw your hat into the ring.

One of the best features of Earthfall is that it supports up to four online players in a single session. If you don’t have three other friends to play with at any time then they’ll be replaced by AI squad mates.

In total there are 15 story-based missions to beat that are all populated on the fly by the vicious aliens by procedural generation. Yes, that means each time you play a level there will be an element of unpredictability to it. Great for playing over and over as you get better at the game over time – maybe even turn up the difficulty if you’re feeling hardcore enough.

As said, we have 20 Steam keys for Earthfall up for grabs. If you want to be in with a chance of winning one then you need to enter the competition via the widget below. Every action you complete is worth one entry into the giveaway, with the more actions you complete increasing your chances of winning.