Since we’re conversing here on a PC gaming site, it’s possible that the story of John Scott’s appearance in the 2016 NHL All-Star weekend has passed you by. It’s one of the most incredible stories ice hockey has produced in recent years: a journeyman player with no place among the league’s elite found himself holding the MVP trophy at the All-Star game in Nashville yesterday, scoring a pair of goals and captaining his Pacific Division team to victory in a 3-on-3 tournament. And if it hadn’t been for fans using their collective voice to force the hand of the NHL establishment on several occasions, none of it would have happened.

Why you’re reading about it on a PC gaming site: well, if NHL fans can send a guy to the All-Star game who had no business being there in spite of the league’s best efforts to stop it, who says we can’t flex our muscle to get EA’s NHL series back on PC? It’s more achievable now than ever.

The sport has achieved a level of stability it was lacking in 2008 when EA pulled the plug on PC support for NHL. The piracy conversation, another primary factor in the series’ cessation here, is a very different one in 2016 than it was eight years ago. There’s much more of a culture on PC for catering to the long tail than ever before, where an admittedly niche prospect such as videogame ice hockey can find its audience. 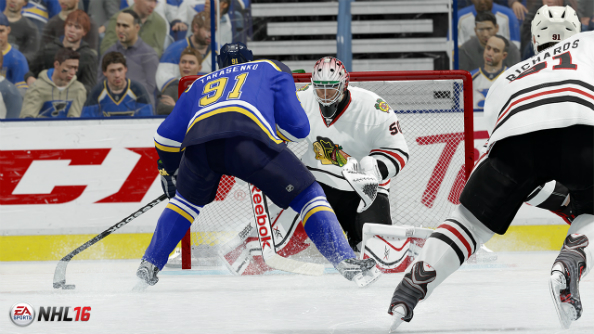 But first, a little background on how the Scott story happened.

The wheels were set in motion in late 2015, when the league announced that for the first time, the on-ice attendees of this season’s All-Star game would be decided by a fan vote. Naturally, a small subset of those fans decided they’d make a joke of the whole occasion by voting for Arizona Coyotes enforcer John Scott, who had amassed 5 goals and 11 points in his 285-game career in the league, and been sent down to the minor leagues several times in that time.

Then that small subset grew.

Before long, Scott was leading the overall vote. Ahead of Patrick Kane, overall leading goalscorer in the league. Ahead of superstar Sidney Crosby, who through various quirks of fate has only played in one All-Star game his whole career. It was a joke at Scott’s expense, and he knew it.

“I told the fans, ‘Listen. I don’t deserve this. Vote for my teammates,’” he writes in an article on The Player’s Tribune. However many people out there wanted John Scott at the 2016 All-Star game, John Scott was not one of them. Neither were his employers the Arizona Coyotes, or the league administrators. 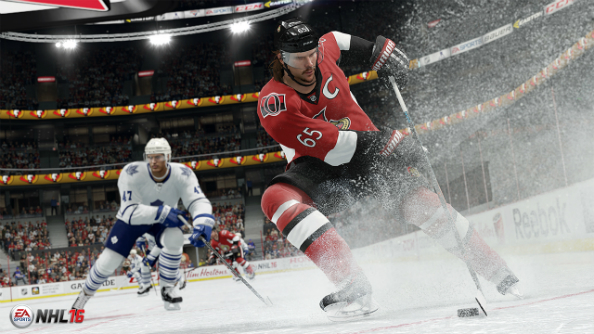 Scott details the levels of pressure exerted on him by both parties not to attend. But after consideration, he decided he’d take the once-in-a-lifetime opportunity. If the fans voted him there, he’d make his little girls proud and go play with the league’s best in Nashville. So when the final votes were counted and Scott was awarded captaincy of the Pacific Division All-Stars, it looked like we were all in for a fairytale sports story.

Until, inexplicably, he got traded to the Montreal Canadiens, sent down to their minor league affiliate St. John’s IceCaps, thus making him ineligible for the All-Star game. “Enforcers don’t get traded midseason when their team is winning,” writes Scott. “If you know the league, you know that it just doesn’t happen.”

The league decided to brush a potential embrassment under the carpet, and in doing so sent a player, his two daughters, and pregnant wife from Arizona to Newfoundland – stripping Scott of the opportunity of a lifetime.

This is where the fans come in again. By this point, the motivation behind of getting Scott to the All-Star game had changed entirely. It wasn’t about poking fun at an average player anymore – it was about excercising the right that the league had given them, recognising an obvious injustice, and seeing a player get the outcome he was entitled to. 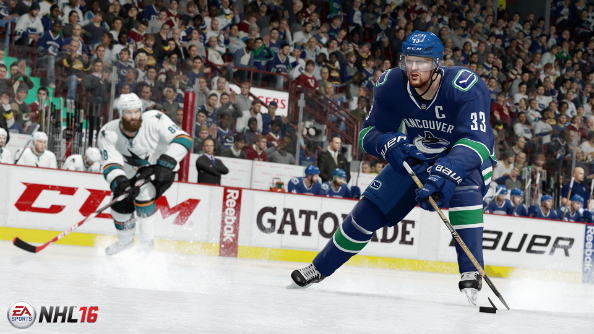 Numerous online petitions like this one sprang up, social media was ablaze with hashtags pressuring those in power to send Scott to Nashville. There were several precedents for players going to the All-Star game after being traded down to the AHL, so they weren’t asking commissioner Gary Bettman to move the earth.

All the pressure worked. Scott went to the All-Star game. More than that, he got to experience an entire stadium of people cheering and chanting “MVP!” whenever he touched the puck. He got to score two goals in that stadium, and then picked up an MVP trophy, a brand new SUV, and a share of his team’s $1 million prize. The look on Scott’s face during this was the kind of unbridled joy you just don’t see on the faces of the ultra elite in any sport. It’s one of the most heartwarming things I’ve ever seen.

As a hockey fan, it’s impossible not to witness the last few days’ events and not pine for a game to recreate those events in. So let’s send our own John Scott to the All-Star game. Let’s use our collective voice to get NHL 17 released on PC.

Why? Well, here’s what NHL 09, the last in the series to be released on PC, looks like: 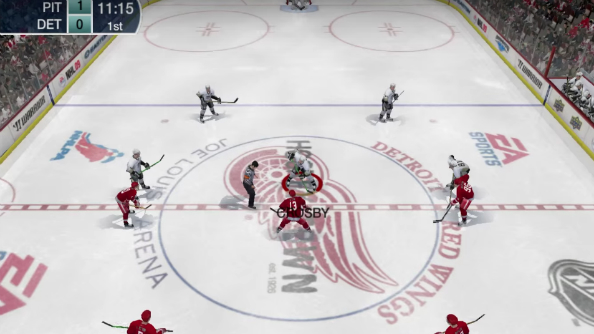 …and here’s what NHL 16 looks like on current-gen consoles: 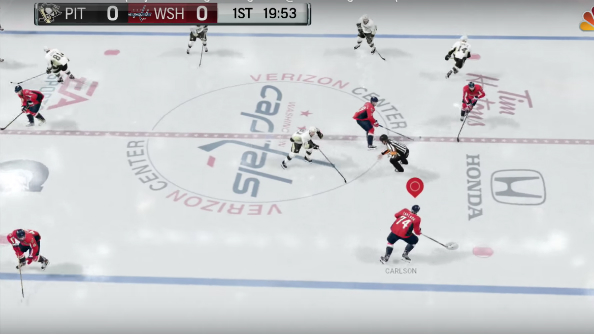 Call me a stickler for details, but there’s something of a visual discrepancy there. It’s not just about looks, though. EA’s NHL games have evolved towards greater realism at a steroidal rate, adding a believable sense of weight to skating, adding convincing board play, improving stick control and overhauling animations beyond recognition.

A small but dedicated community is doing the best they can to keep NHL 09 fresh on PC with roster updates and mods, but with respect to the great work they do, the game feels woeful by today’s standards. We’re crying out for a new title here, EA. We want our John Scott at the All-Star game.

Let’s look at it from EA’s perspective. back in September 08 when the publisher decided subsequent titles following NHL 09 would appear on consoles only, the series wasn’t selling well on PC, and piracy was a major contributing factor in that.

Those were the days before digital distribution became so ubiquitous on our platform. It was pre-Origin, in fact, the company’s own distribution platform arriving in June 2011. So in 2008, the only way to play NHL 09 on your PC was by going out and buying the disc. And if you were a software cracker in 2009, bypassing a game disc’s DRM was effortless. Thus: a high piracy rate.

Fast forward to 2015: remember how long it took for Dragon Age: Inquistion to be cracked? Alright, about a week. Still an eternity in PC piracy, and the Denuvo Anti-Tamper Tech protecting the game has been proving a real problem for collectives such as 3DM who specialise in cracking games. It’s reasonable to imagine that if EA really wanted to minimise the piracy rate of a new NHL title on PC in 2016, they could do so with some success. 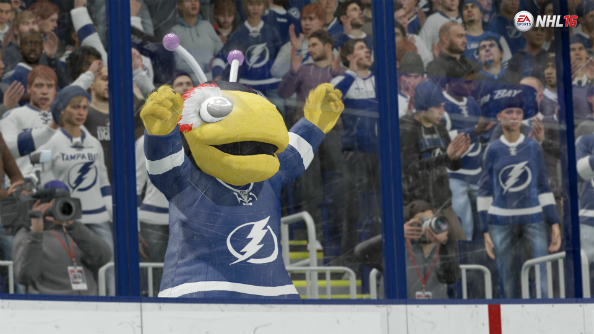 The other aspect of digital distribution is that it really unlocks the potential of long tail economics, mentioned earlier. Producing a product without a mechanical cost per unit (the game disc and packaging) makes it much more commercially viable for a publisher to release a game on digital platforms for a smaller, niche audience, without making a loss. You didn’t spend $X million on physical media, so you don’t have to recoup that $X million.

It does, however, cost money to port the game over from consoles to PC and implement the kind of netcode that would keep a cash cow like HUT (NHL’s equivalent of the hugely popular FIFA Ultimate Team) safe from hacks. There’s an obvious risk/reward principle here. You need to spend money to bring HUT to a broader user base, but that user base spends a lot of money on pretend trading cards.

There are other options for hockey fans on PC. Eastside Hockey Manager is one of them, and it’s fantastically absorbing. But I can’t deke past a defenseman and score a breakaway goal in it. I can’t see my team’s beards grow as they ascend through the playoffs. I can’t be John Scott.

Maybe I’m the only one who cares about this in PC gaming. But there’s evidence to suggest I’m not. And if that one person, wherever they are, hadn’t submitted that initial vote, John Scott wouldn’t have spent yesterday receiving an oversized million dollar check from diminutive NHL commissioner Gary Bettman. So I’m casting my vote – let’s bring back #NHLonPC.