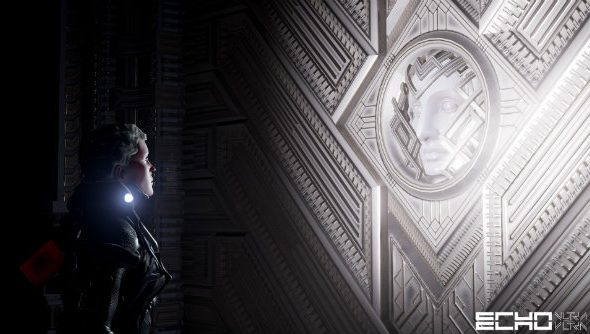 There’s an Unreal 4-made game on Steam Greenlight called ECHO and it’s super intriguing. Placed in stasis and blasted to a distant planet as part of ritual, ECHO plonks you in a strange alien world.

Explore the galaxy yourself in our list of the best space games.

The game begins with our female hero waking up after a century in stasis and wandering into “a palace out of legend, a marvel of the old civilization eons gone, still awaiting its first human occupants,” says the blurb on the game’s official site.

“Out here, using forgotten technologies, she hopes to bring back a life that shouldn’t have been lost. But nothing could have prepared her for what she’ll face in the ancient halls below.”

It’s a third-person action game with stealth elements, where you’ll need to be quick on your feet to survive, according to the site. Instead of the gruff marines of your usual space-based action games, we’re put in control of En, a reluctant pilgrim who never wanted to leave her homeworld.

The announcement trailer does it much more justice than words ever could. I love everything about the trailer, from the setup to the art style – there’s some stunning, evocative imagery in there. Check it out for yourself below:

You can vote for ECHO on Steam Greenlight.