EKWB are already world leaders in custom liquid cooling components and have been dabbling in the world of all-in-one coolers with their XLC Predator for a little while. Now they’ve refined that idea and put all that tech into their just announced EK-MLC Phoenix – it’s not your run-of-the-mill cooler.

Want see what all the fuss is about and overclock your CPU or GPU? Here’s our handy guide to PC hardware.

Sticking to what EK do best, this cooler isn’t a simple one-and-done package. You still have a wide range of customisability with the Phoenix, lending well to users who want the flexibility and heat-minimising properties of a custom loop without all the effort. Radiators can be chopped and changed at will, and it can even cool your graphics card.

The Phoenix features compatibility with GPU blocks, so you really can have your cake and eat it. EK list support for all the latest generation graphics cards from both the red and green teams, so no need to fret that they won’t be able to custom cool that RX Vega 64 (it may be your best bet for custom cooling, after all). The GPU block connects directly into the existing loop with EK’s Quick Disconnect Couplings, which looks like a refined version of the same concept found on their XLC Predator 360 cooler.

Thanks to these Quick Disconnect Couplings, you can add or remove components as you fancy, and these special connectors keep all that precious cooling fluid locked in, so you don’t need to refill every time you change a part. I have to admit, I’m also quite partial to that braided cable style. There are a few stipulations, however…. Those garden hosepipe disconnects need to be built to last, and not introduce any air into the system – plus, this chiller doesn’t come cheap. 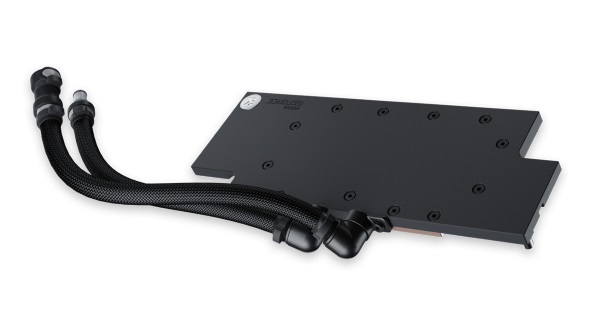 At €67 for the CPU block alone, and another €170 for the 240mm radiator/pump module, and another €125 minimum for the GPU (dependent on the GPU itself) – this cooler certainly comes at a premium.

The Phoenix isn’t skimping on the premium custom cooling components for that price though, with a MX CPU cooler, Vardar EVO fans, SPC pump, and CoolStream radiator, this cooler is more than capable of chilling your toasty components.

This isn’t the first time we’ve seen an all-in-one loop that can add in more components – the AlphaCool Eisbaer features a similar design after all – but EKWB certainly have a knack for form and function when it comes to keeping components cool and quiet.

Your regular gamer isn’t rushing out for a custom cooled rig, despite how much they might appreciate how stunning they often are. For enthusiasts who really want to push their systems above and beyond, and need exceptional cooling to match, liquid cooling is their one stop shop. If you don’t want to dive through the rigamarole of custom loops however – as a somewhat inbetween product – the EK-MLC Phoenix may just be the right fit for you.