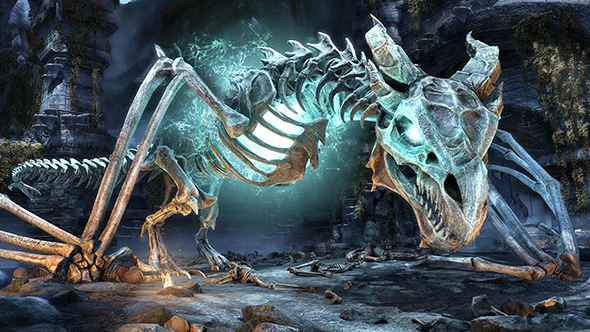 If you’ve got a deep, abiding love for animated dragon skeletons, The Elder Scrolls Online’s latest bit of DLC will provide some excellent new features for you and your oddly specific tastes. Alongside new dungeons for the expansion, the latest update for the base game provides its own new content and a system to keep your characters looking their very best.

Check out more of the best MMORPGs on PC.

The Dragon Bones DLC pack features two new dungeons. Scalecaller Peak has you battling against diseased cultists aiming to bring down a deadly plague across Tamriel. Fang Lair will send you into the depths of a Dwarven ruin to stop a necromancer from unleashing an undead dragon on the world. Judging by the volume of dragon skeletons I’m seeing in the promotional imagery, I’d venture to guess you may actually fight that animated skeleton. (Shocking, I know.)

As always, the DLC is available as part of an ESO Plus subscription, or for purchase in the in-game crown store. You’ll get a Renegade Dragon Priest Mask as a reward for simply setting foot inside either dungeon.

Update 17 also marks some changes to the base game. Most notably, dye stations are converting to outfit stations, and you’ll now be able to use them to tailor your appearance regardless of what kind of armor you’re actually wearing. You get one unique outfit to be tailored using gold, and you can acquire outfit change tokens and outfit slots at the crown store.

PvP gets new arenas in the form of Mor Khazgur and the Deeping Drome, a new level up advisor system gives you guidance in building your character, and you can now acquire collectable items giving you in-home storage options. Combat is also seeing a base level revision, which among other things will make “it easier to identify and activate ability synergies.”