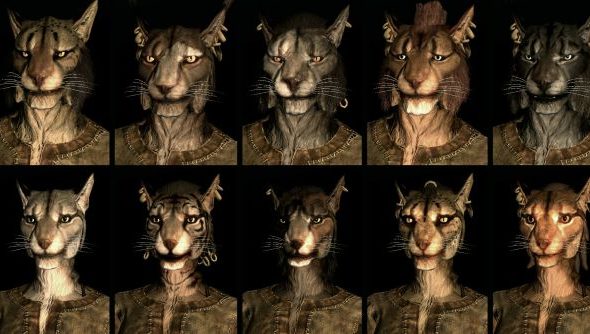 The astonishing thing about surveys is how accurately the views of a small sample reflect those of the majority. Ask 10 random people how they feel about, say, the geopolitics of the Balkan Peninsula, and you’ll get a pretty good idea of what the entire world thinks of it. The same goes for Skyrim – ask 1,000 people what their game preferences are, and you’ll get a good indication of what everyone else is doing.

This is exactly what Reddit user STLFan2006 did on the popular social news site. Over 1,000 people responded to his survey request before he did the right thing and turned it into an online form. Of course, the results are from Reddit users, so they’re just reflecting that particular internet community.

At over 24%, the Nord race is by far the favourite, which makes sense given Skyrim’s pseudo-Scandinavian setting. We’re guessing a lot of people new to Skyrim choose Nords because they generally get a warmer reception around Skyrim, and because they don’t look weird. The Khajiit cat people came second, undoubtedly thanks to their agility, stealth and the fact that everyone loves cats. The Dunmer Dark Elves followed up – their freaky looks and status as outsiders probably make them attractive to freaky-looking outsiders.

Central city Whiterun was voted as Skyrim’s best metropolis, possibly due to its position as the first city you come across on the main quest. The decadent, archaic home of the Nords packs some awe-inspiring architecture and a number of unique districts. You’ll also find the Hall of the Dead here, if creepy skeleton-infested catacombs float your boat. Skyrim’s capital Solitude surprisingly comes second – although it’s bigger than Whiterun, it appears further into the main quest. The Bard’s College seems to have attracted a lot of flak from Reddit users, though.

The majority of Reddit users – 60.64 per cent – went for the Imperial faction. What’s not enumerated is the number of players who chose Imperial as their race, and then fought for the Stormcloaks. But, hey, Skyrim’s a liberal and easy-going place like that. Thing is, both the Imperials and the Stormcloaks are bastards in their own special ways. There’s a statistic somewhere that suggests most gamers tend to play as good characters, and always try and do the right thing. Skyrim morally conflicts the player by not having black-and-white factions, and is a better game for it.

A single vote lay between one-handed and archery, with good ol’ bows and arrows coming out on top. It’s no real surprise that Reddit users prefer to do things one-handed. The mage skill of destruction came third, and two-handed weapons were used by less than 10 per cent of Reddit contributors. Unarmed was thrown in as an option by request, but only about eight people voted for it. There might have been more votes, but we can only assume that the kind of people who play unarmed are the kind of pacifists who think filling in forms goes against being a conscientious objector.

The badass Dark Brotherhood questline came out on top, with numerous Reddit users describing it as the best quest in the history of everything ever. Its brutal approach to stalking and killing numerous citizens of Skyrim recalls Assassin’s Creed, and it takes in some of the best locations in the game. The Thieves’ Guild quests came second, confirming our suspicions that Reddit users are a bunch of stealing psychopaths. Main questlines are notoriously weak in Bethesda games, but not so in Skyrim – it came third here. Breezehome may sound like something you’d use to freshen up a sofa after a wet dog’s sat on it, but it’s also cheap and conveniently located.

It’s very hard to discuss the main quest without entering the world of massive spoilers, but suffice to say the weirdy-beardy Greybeards beat the dynamic Blades by a factor of three to one. Greybeards are new to The Elder Scrolls series, which perhaps explains their popularity. Comedy mad prince Sheogorath was voted the favourite Prince here, with about a third of players voting for him. The devilish Sanguine, and sisters Azura and Nocturnal all did pretty well, too, but mental deities are clearly the way forwards. It would be interesting to compare Reddit’s results with Bethesda’s own matrices for Skyrim – we suspect they’d be remarkably similar. At the same time, the sheer amount of choice available in Tamriel thanks to the game’s Radiant Story system means that gamers can play it as they choose. That is, as a Whiterun-lovin’, Imperial Legion and Greybeard-factioned, Khajiit archer who worships Sheogorath and plays the Dark Brotherhood questline.