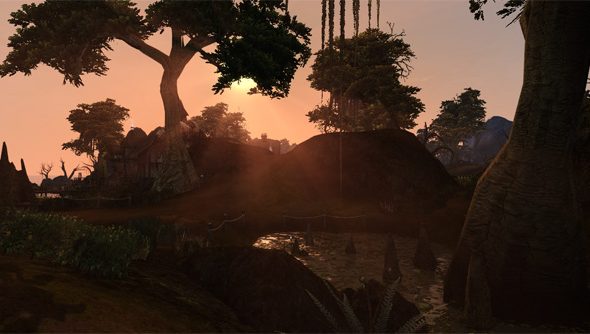 Morrowind has always been the most artistically accomplished of the Elder Scrolls games, more so than the bleached fantasy fudge of Oblivion and the me-too Tolkein grandness of Skyrim. It has giant friendly ticks you can sit on, floating cities and sandstorm ravaged towns of psychedelic mushrooms and shell-constructs. In my mind it still looks as realistic as the day I upgraded my nVidia graphics card to get the nice real-time rippling water effects. But in reality it looks as dated and threadbare as a decade old game is allowed to look. Enter Morrowind Overhaul v3.0, which aims a thimble of digital botox squarely at Bethesda’s ancient RPG.

Beyond the new graphic and audio frills, Morrowind Overhaul v3.0 introduces a drastically simplified installation process. “The first version had a 40 page installation guide,” writes developer Ornitocopter, “the second version’s guide was just 10 pages and the third one will have just one, and you don’t even have to read it!”

Mods tend not to look like mods on film, so the overhaul mod is, in fact, a bunch of smaller mods taped together: “We finally decided how to do this,” explains the mod’s creator. “We will put together a handful of mods, the non-optional ones, which will become the core of the package. When the core is as much bug-free as Morrowind can be, we’ll proceed in including more and more mods.” It’s a verified, and faintly incredible looking,non-game-breaking conglomerate of visual enhancements for Morrowind, then, built upon the creator’s own core of game-improving mods. With that simplified installer promised as well, you’re looking at perhaps an essential plug-in for anybody looking to replay Bethesda’s funkiest looking Elder Scrolls adventure with high-res, ride-on ticks.