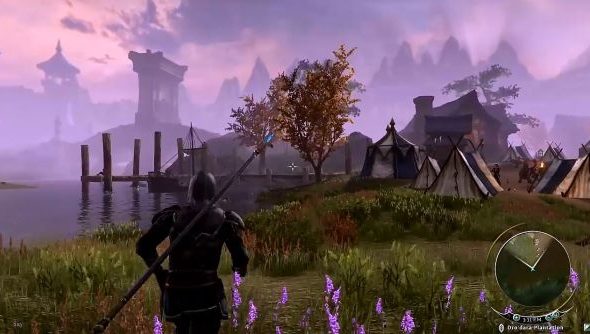 Lord of the Rings Online. SWTOR. Tera. Rift. That’s a chronological list of MMOs that were subscription-based when development started on The Elder Scrolls Online, now turned free-to-play.

Zenimax Online and Bethesda still follow the old way, though: they reckon a flat monthly fee is the only way to avoid “sacrifices and changes we weren’t willing to make.”

“We’ve been working hard to deliver the game that fans want,” Zenimax Studios president Matt Firor told Gamestar. “One that’s worthy of the Elder Scrolls name. Choosing the right business model is part of that. We are going with the subscription model for ESO.

“We’re building a game with the freedom to play – alone or with your friends – as much as you want. A game with meaningful and consistent content – one packed with hundreds of hours of gameplay that can be experienced right away and one that will be supported with premium customer support.”

Players purchasing Elder Scrolls Online will get the expected 30 free days of full access to every corner of Tamriel – beyond which they’ll pay monthly for “unlimited access to the game”.

“The choice is yours to play as much as you want; hundreds of hours of content, PvP, etc – is all there for you to experience with the base purchase of the game,” said Firor. “If you want to continue playing for hundreds of hours more after that first month you’ll pay a flat fee.”

So why are Zenimax wary of free-to-play? Intriguingly, it turns out they’re afraid of damaging the sense of freedom Elder Scrolls players have become accustomed to.

“The Elder Scrolls games are all about allowing the player to go where they want, be who they want, and do what they want,” Firor explained. “We feel that putting pay gates between the player and content at any point in game ruins that feeling of freedom, and just having one small monthly fee for 100% access to the game fits the IP and the game much better than a system where you have to pay for features and access as you play.

“The Elder Scrolls Online was designed and developed to be a premium experience,” he went on. “Hundreds of hours of gameplay, tons of depth and features, professional customer support – and a commitment to have ongoing content at regular intervals after launch. This type of experience is best paired with a one-time fee per month, as opposed to many smaller payments that would probably add up to more than $14.99/month anyway.”

Cor. All this talk is in stark contrast to that of the most of Firor’s peers – but the Zenimax president emphasised that Zenimax weren’t holding a “referendum on online game revenue models”.

“F2P, B2P, etc. are valid, proven business models – but subscription is the one that fits ESO the best, given our commitment to freedom of gameplay, quality and long-term content delivery,” he said.

“Plus, players will appreciate not having to worry about being ‘monetized’ in the middle of playing the game, which is definitely a problem that is cropping up more and more in online gaming these days,” Firor added. “The fact that the word ‘monetized’ exists points to the heart of the issue for us: We don’t want the player to worry about which parts of the game to pay for – with our system, they get it all.”

It’s a more than half-convincing argument, but I find myself wondering: perhaps the new way isn’t a free-to-play launch after all? Perhaps it’s a traditional release, with tentative plans for a free-to-play switch 12 months down the line?