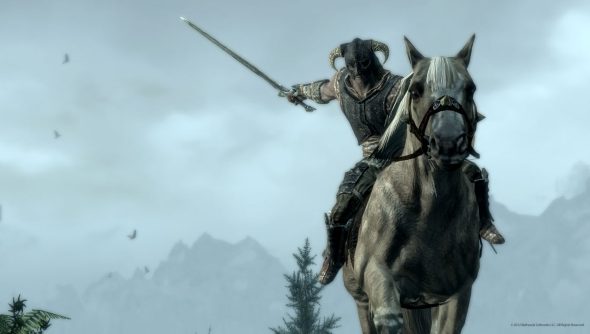 Inbetween the time of Oblivion and Skyrim, the ability to fight from horseback was lost. Lore suggests it’s because the equine god, Redrumnor, smote the people of Tamriel for flicking his ears. But then the Dragon Priests did read aloud from the sacred texts of Bethesda’s Patch Notes 1.6, and did solemly declare: “Mounted Combat – Skyrim now allows you to do melee and ranged combat while riding a horse”. And there was much rejoicing.

The horse combat is one of the fruits of a company wide post-release Bethesda Game-Jam, where the developers were allowed to make anything they wanted for the game they’d just released. Horse Combat was one of those experiments. I had to try it. Installing it currently involves heading into Steam’s Settings and opting into the Skyrim beta and browsing the Steam Workshop while it patched. I manfully only installed a further seven mods before I had the patch.
It adds ranged and armed combat and It’s done with the same mixture of aplomb and shonkiness that typifies Skyrim: hopping on a horse and stealing it from its owner (who tells cheers me on to “ride strong”), I tried to drill a few arrows into him and some innocent bystanders. Slowing and aiming makes it easier, but at one point the arrow zoomed off in a direction I definitely wasn’t pointing in. It just… went there. Still, most of the awkwardness was my fault for stealing a horse and turning it back around in a tight village, when this is clearly a system built for the open ground. On the plains, trundling along and taking aim at the sweet spot at the back of a moose’s head, it felt a lot more in control, but there were still moments where the combination of me driving, the horse’s awkward clipping and some odd arrow physics resulted in an embarrassing miss. It’ll take time to perfect your aiming prowess (no perks or skills have beenadded), and it’s not game changing, but it’s a fun, free addition.