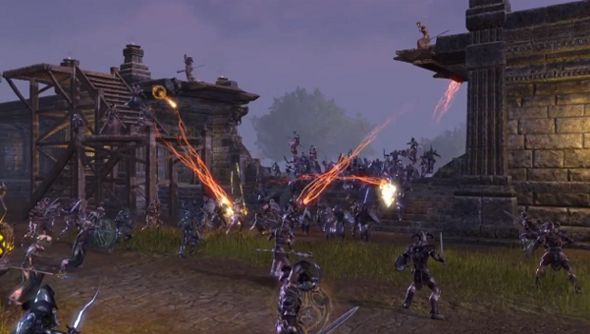 Thus far Zenimax Online have sold their PvP Cyrodiil on the promise of its melodramatic metagame – a high-level waltz of captured keeps and toppled emperors. But nobody starts as emperor – like budding monarchs in the real world, they’ll have to work their way up. All of us will enter that facsimile of Oblivion’s world at level 10, looking for things to do that won’t get us squashed beneath the steel heel of a passing general. Here are some of our options.

On the battlefield, low-level characters can turn a high-level tide – so long as they remember their place and bide their time.

“It really depends on the player behind the character,” explain Zenimax. “We’ve seen fights where a level 50 character has been killed by a level 10. Of course, there’s strength in numbers, so even a highly-skilled level 50 character can be taken down by several low-level characters.”

High-ranking enemies will be worth the effort, conferring large amounts of Alliance Points upon death. But conversely, they won’t earn less for slicing lower-ranking players like yourself – so don’t be surprised if they take their eye of the nearest keep for a second to swat you.

“We’re working diligently to find the best balance point so that levels are still important and benefit your character in Cyrodiil,” say the developers.

Players can assemble large groups of up to 24 players to pull down larger targets. It’s even possible that they’ll manage to steal an Elder Scroll – but bear in mind that whenever a Scroll is picked up, captured, or returned, its location will appear on the map for higher-ranking players to chase after.

More likely, then, that low-level players will find success in guerilla tactics – camping the end points of transit lines or at milegates or bridges, which serve as bottlenecks between the territories of the three alliances that occupy Cyrodiil.

“Note that the five towns located in Cyrodiil, where players can find quests, serve as great locations to spy and find enemy players to kill,” suggest the developers. These are also perfect spots to find solo skirmishes if you find yourself groupless in the early hours of the game.

Low-level players can even play a part in the keep metagame that makes Elder Scrolls PvP a compelling prospect. Winning alliances have to spread their defences thin to keep hold of their many strongholds – which leaves them vulnerable to coordinated attacks.

The fast travel spots found at three resource points around enemy keeps are of particular interest – capture all of those as part of a larger group, and you’ll cut off reinforcements in the event of a siege.

The feudal player roles and high-level perspective of Elder Scrolls PvP are precisely what makes it a more attractive prospect than, say, Guild Wars 2’s World vs World mode. But Zenimax will need to work out how to keep players happy at bottom of the pile. D’you think they’ll manage it?