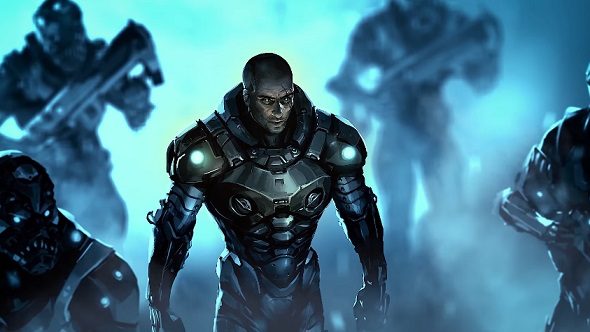 Planned for release in autumn of this year, THQ Nordic and Piranha Bytes have released the prologue for their upcoming sci-fi adventure, ELEX. Set on the world of Magalan, this intro cinematic shows how society was cast into chaos following a comet strike, which also brought the mysterious substance Elex to the planet.

For more space sagas, look no further than our list of the PC’s best space games.

A world far more advanced than our own, Magalan was a “civilization of millions” before a comet struck its surface. This cataclysmic impact levelled cities, caused continent-wide earthquakes and summoned firestorms which covered the planet’s surface. With much of the world in ruins, survivors of this disaster were forced to adapt to this doomed world. Technology became a mix of high and low tech, with some factions donning Viking-esque armour and weapons, while others scavenged weapons and devices from the old world. While the comet mostly brought destruction to Magalan, it also introduced Elex to the world’s ecosystem.

A mineral which seems to work as both a source of magic, a way to build robots and a miracle drug, Magalan’s factions began to fight over Elex. Some even started to ingest Elex, with it transforming some into magical, emotionally dead super-beings, while others devolved into mindless mutants. Called Albs, these super-beings have begun to wage war on the lawless factions of Magalan, crushing them under their heel as they harvest all remaining Elex. Tasked as Alb commander Jax, players begin their quest on a solo mission “to change the fate of Magalan.”

In the actual game, this means players will be running round a massive open world, using the Albs’ superior technology and magical abilities to lay waste to space Vikings and mutated horrors. As Magalan has such a wide spectrum of technology, players can be fighting with crossbows, swords and shields in one area, just to switch to flamethrowers and plasma rifles somewhere else. Throw jetpacks into the mix and you’ve got a 12 year old boy’s fantasy of being a superhuman space warrior who inexplicably fights with both a steel claymore and a high-powered laser gun.

Developed by the team behind the Gothic and Risen series, ELEX should be quite the sci-fi romp when it launches in Q3 of this year. Make sure to check out its Steam page for additional information.