I’ve been playing Alpha 2, the next to latest version, of Elite: Dangerous, zooping around in my spaceboat, swishing between asteroids and kablooshing enemy ships in its series of single player combat missions. Elite, it turns out, is really, seriously good. It controls remarkably similarly to the original game, with dogfights consisting of a rolling and pitching your craft, twisting and arcing through space in your attempts to keep your target in view. But at the same time it introduces some of the kinetic spirit of Frontier, Elite’s sequel, with less rigid physics and a touch more Newtonian space-skidding giving combat real momentum and punch. Braben’s development team have worked some real nostalgia black magic here, merging our fuzzy memory of how Elite used to be with a modern, uncompromised space combat sim.

Alpha 2 is tremendous, yes, but the soon to be released Alpha 3 is another beast entirely. Alpha 3 dumps on Alpha 2 from orbit. Alpha Poo, you’ll be calling it before long.

I’ve been playing the latest version of Elite: Dangerous, and here’s what’s up with it.

The current version of Elite is a fairly comprehensive demonstration of the game’s combat scenarios, ranging from destroying static targets, to one on one dogfights, to defence missions with multiple enemy ships. There’s nothing connecting these missions besides a scant bit of loading screen plottery, and as such these scenarios exist as stand alone levels accessed from a menu screen.

In Alpha 3 however, these combat scenarios exist as locations in space that can be travelled to. Glancing to your left during flight will trigger your in-cockpit navigation screen to appear, listing local systems to which you may hyperspace jump. Each of these systems contain one of the missions from the previous alpha, which can be jumped into and out of at will, with no loading screen or jarring exit to the game’s main menu required. There is, as it stands, a brief pause during hyperspace jumps in lieu of the fancy spacewarping effects still being developed, but in later versions Braben promises this will be seamless.

Hyperspace jumps require a few moments to charge, around ten seconds, during which your ship will rapidly begin to warm up, opening all of its exhaust ports to disperse heat as much as possible. Heat signatures in Elite: Dangerous give away your position to any nearby players or AI ships, so managing heat dispersal becomes an integral skill during combat. Stealth can be achieved by locking down your exhausts, but this allows heat to build up inside your ship’s internal systems, eventually overheating your cockpit and causing a nasty explosion. “It’s the spaceship equivalent of holding your breath,” Braben informs me.

Jumping away from danger not only paints a giant temperature target on your back, but as with the classic games you’ll also be leaving behind a warp signature, one that can be traced to its destination with the proper technology. That same delay between activating your hyperspace drive and actually jumping is used to begin to generate an arrival warp signature in your destination system. That is to say, your arrival will be wee telegraphed in whatever system you’re jumping to, allowing opportunistic pirates to take advantage of your piping hot ship as it sluices, exhausted and combat unready, through spacetime.

Alpha 3 only contains a handful of systems, enough to contain all of the missions from the previous version, plus at least one more ‘neutral’ system. Eventually however, explains Braben, all of the stars you see will be real places you can visit, each one a system unto itself. From Earth you’ll see all of the familiar constellations, but click on Alpha Proximi from your cockpit, hyperspace jump to it and you’ll get a whole new perspective on the heavens, one where the constellations have been skewed by a few light years. Elite: Dangerous is a living planetarium. That’s tremendously exciting stuff. 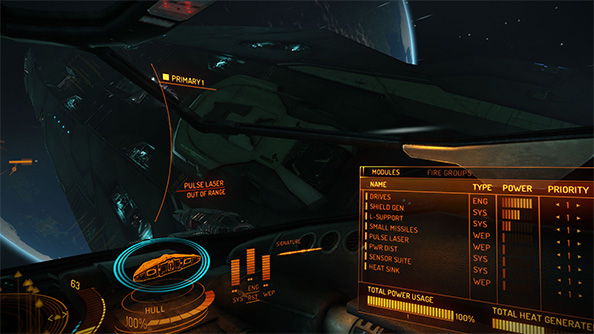 That additional system is home to one of Alpha 3’s most incredible new features, the epic and iconic Port Zelada space station. The slowly rotating megastructure is immediately identifiable as the polygonal sort seen in the original Elite, a vast and roughly round station with a narrow rectangular docking port. This time around the base is rendered so much larger, a miniature Death Star hanging in the darkness, bronze light bouncing off its intricately detailed and greebled exterior.

Approaching it triggers another nostalgia-gush. After requesting permission to land, you must line up to face the docking port using lateral thrusters, before attempting to match the gentle speed at which the station rotates — there are no separate controls used here, from combat to docking you’ll be using the same thrusters and throttles. An instruction to head to Bay 12 is met with some confusion. I ask if there are multiple ports on the station’s exterior. Braben explains, as I sail through the opening, that the bay I’m looking for isinside the station.

As he speaks, the vast structure’s interior comes into view, a ring of small landing pads arranged evenly around what resembles the inside of a high-tech washing machine. There’s an atmosphere held inside the station, evident by the whooshing and audible thrumming of engine sounds the moment I passed through the docking port’s magic vacuum-field. Again, there’s no loading screen and no faked scaling of interior and exterior spaces, just a smooth transition from outside to inside.

The slow spinning of the station gives it a micro-gravity one tenth that of Earth, Braben proudly informs as I navigate my way to bay 12, deploying my landing gear and using vertical thrusters to manually set down. The radar switched to a special landing mode, in which I must manoeuvre my craft to align it with the centre of the landing pad. Once touched down, I can communicate with the on-board BBS or outfit my ship with new weapons and tools, such as heatsinks and cargo scanners.

The latter option carries your ship via an elevator to the bay’s hangar. From your cockpit, as you descend into the station’s innards, you’re faced with two flickering advertisement billboards. By this point, Elite fans will be weeping.

There’s no trading yet, but the ability to sell cargo collected from destroyed AI ships and use that money to upgrade your craft means that there’s a gameplay loop. And with that small update Elite: Dangerous takes the giant leap from an impressive proof of concept demonstration to an actual, playable thing, a hub around which a fuller and fuller game can be built.

The direction in which the game is expanding and the care with which features are being added already makes Elite: Dangerous a more exciting prospect than the disappointingly cruddy X: Rebirth, and the rate of development looks set to outpace the vastly overfunded Star Citizen. Elite: Dangerous is perfectly placed to become the frontrunner in this next generation space race.

Alpha 3 will be released to backers “soon”, with a paid beta release coming later this year.