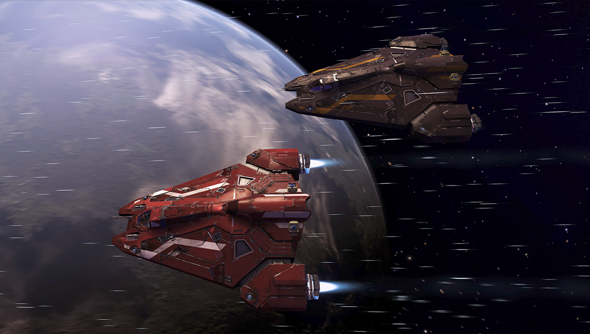 This week, Frontier Developments added a new tier of funding to their Elite: Dangerous Kickstarter project. Pledge £4,500 and you can write a piece of fiction set in the game’s world, to be published and promoted alongside the game. The developers are even willing to shunt the game about to fit new plot and locations.

Now the inevitable has happened: a man has started a Kickstarter project to fund his pledge.

The potential author’s name is Drew Wagar, and his enthusiasm for Elite and its thinly-sketched universe is palpable. Though already a published author, he also works a 9 to 5 job and plans to write his Elite: Dangerous tie-in during his two hour commute to London.

Wagar cites Azimov, Clarke, Heinlein, Pohl and Wells as his sci-fi influences, and has already written a series of fan fiction novels for open-source Elite-alike Oolite, with 100k+ downloads to his name. Above all he’s a child of the original Elite, and considers the project a “down-payment” on the debt he owes the series.

“Elite was both story and game, and for many of us an escape from a reality which looked increasingly bleak as the 1980s drew to a close and we all entered the workplace,” he writes. “Perhaps Elite showed us that hard work and determination could prevail over impossible odds, or perhaps it was just a great game, a distraction from the depressing real world.

“Either way, I don’t think Elite’s greatest contribution was the oft mentioned 3D graphics, or the procedurally generated planets. The real big deal was the unforeseen and unlooked for opportunity to mould and shape the minds of youngsters; there can be no greater privilege, or heavy responsibility, than that.”

At time of writing, he’s acquired £2,500 of his £4,500 goal with over a month to go. I do worry that Wagar has condemned his book to a thematic nowhere land with his reward tiers, which promise to farm out the name, “bio, ship ownership, planet of origin, description and character traits” of major characters, minor characters and even the chief antagonist to backers. And though Wagar talks about writing a fitting successor (though not sequel) to Robert Holdstock’s The Dark Wheel, the short story included with copies of the original Elite, he doesn’t mention that The Dark Wheel is alreadygetting an officially-sanctioned sequel commissioned by Frontier.

What’s more, Wagar’s project prompts an intriguing question. What happens if he funds his pledge, but Frontier fail to fund the game itself? £1,250,000 is, after all, quite a lot of money. Luckily, Frontier have had the foresight to cover their backs, and those of their pledgers.

“Firstly, we are confident that we will reach the funding level,” said the developers in an update on their Kickstarter page. “However, in the very unlikely event that the funding level is not met, at the end of the funding period we will be happy to make a deal outside Kickstarter for half the pledge level (ie £2,250), available to all those who have ‘Writer’s Pack’ pledges at the end of the funding period, which will grant all the rights you need, and a license to use the relevant materials and imagery, so the book publishing can still go ahead.

“This should address the concern about a writer achieving funding via another route (eg from a publisher, or from another Kickstarter project), and ours not succeeding, leaving the potentially difficult situation where the writer cannot deliver on their promise.”

So: snake swallows tail, minds implode. Are you still with us?